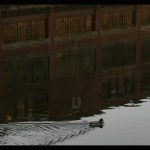 The small town of Springfield, VT used to have a thriving machine tool industry. Did its outsized significance in WWII make it a target for Hitler? Three generations of Springfielders weigh in.

Director(s) Bio:: Bryant Naro and Meagan Frappiea are Slate Roof Films, a production company based out of Keene, NH. They work in documentary, corporate, commercial, education and narrative. In 2015 they released their first feature documentary, Brew Hampshire.