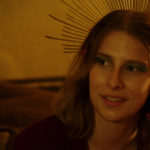 In a not-so-distant future, Golda is the last dyke delivery driver handing off packages to isolated survivors living in denial of the impending, climate-accelerated apocalypse. The world hasn’t fully decayed yet, but there’s signs; a flaming meteor hangs above and rugged individualism is the new social reality.

Obsessive collectors await packages from Golda who shuttles from house-to-house in her sensible “Doomsday Delivery” hatchback. The different packages contain collectable miniatures, some political chotchkies, and even fancy lime green latex dresses. Each item is a representation or celebration of the political and material excesses directly responsible for ushering in the apocalypse. Golda communes for a bit with each customer to learn about their orders and what drove them to seek out these strange objects. She’s left wondering what ideas and items will survive the impending world’s end.

Golda’s roommates and friends seem unconcerned with the state of things, choosing to ignore the signs of decline. Instead, they indulge in decadent meals and reckon with the chaos through rituals and romance.

Eventually, they convince Golda to drive them to an unironically themed “end of the world” party where, amongst the benevolent frat bros and queers engaged in rageful ideological battles about identity, she meets Tova, a deeply reclusive queer who hasn’t left their house in a while. Tova and Golda quickly realize they’re the only two people who understand the gravity of the current situation, and decide to make the best of their limited time together.

Golda’s deliveries, adventures and final romance in Shelf Life examine the items, events, rituals and relationships that might help us divine meaning from an existence plagued by uncertainty and undeniable climate apocalypse.

Director(s) Bio:: Liz Walber is an experimental filmmaker in Easthampton, Massachusetts. They graduated from Smith College in 2016, double-majoring in Film Studies and Gender Studies. Their narrative and documentary films explore pathological internet subcultures, contemporary queerness, identity and transcendence. Through the action of collaborative filmmaking, Liz seeks to reinvent realism to better fit the volatility of the gay agenda in the oncoming apocalypse.

Liz directed two experimental documentaries: New Daughters, a film about online sex work and feminist academia, and Artifact, a virtual seance in response to a sexual assault at their high school. In addition, Liz produced a short documentary about the beloved Yiddish poet, artist, and activist Beyle Schaechter-Gottesman entitled BEYLE: The Artist and Her Legacy for The Wexler Oral History Project.

Liz also assists the team of professionals at Northampton Open Media as the Media Coordinator and is currently working on Every Other Ice Age, a short film to be shot in Madison, WI in 2021. Follow Liz on Vimeo and visit musicalfanzine.com for more information about their collaborative production group.

camp, end of the world, other worlds, premieres 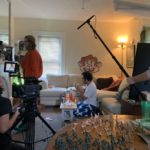 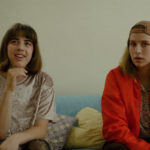