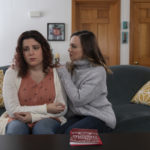 This ten minute drama takes place during the New England winter holiday season. Nina borrows her husband Jim’s car for the day to go shopping with her sister Claire and discovers a card with a gift certificate from another woman. Determined to not let the note ruin her day, Nina shops with Claire at her favorite toy store from their childhood for gifts. Her feelings and frustrations reveal themselves throughout the day until she breaks down and opens up about the incident.

New England Connection: The film takes place in Massachusetts and the cast and crew reside in New England.

Director(s) Bio:: Brittany Severance is an independent filmmaker and media artist based out of Worcester, Massachusetts. This spring she received her MFA in Film and Media Art from Emerson College. Her work primarily focuses on themes dealing with identity, family, and relationships through female-driven narratives. Currently she teaches film studies and media production as an adjunct faculty member at both Worcester State University and Clark University. Her creative work has been screened and shown at places such as the Women's International Film and Arts Festival, the Shawna Shea Film Festival, Film & Her: A Female Filmmaker Showcase, the Fitchburg Art Museum, the Vermont Center for Photography, and the Providence Center for the Arts among others.