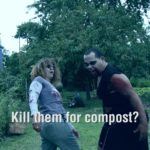 A tongue-in-cheek approach to the traditional how-to-video, this short film teaches you the basics of composting with Zombies.

New England Connection: Everything about this film is New England. It was shot here, written here all the actors, writers producers and directors are from New England.