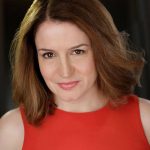 Boston-based award-winning actress Mary C. Ferrara caught the acting bug in her late 20s when she took an improv class on a whim. Along with being in several improv and sketch comedy troupes over the years, Mary has done several plays and has 100+ independent film projects to her credit. Some of her favorite roles include Barbara in August: Osage County, Helena in A Midsummer Night's Dream, Larissa in the web series Family Problems, Katie in the web series World's Worst Director, as the woman in the short sci-fi film The House, Candy in the web series Magicland, and Debra in the short film Cold.