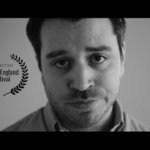 An admin just wants to send an e-mail.

He's been writing, producing, lighting, shooting, directing, and editing short films since 2017. All of his projects have been made with *very* little to no budget.