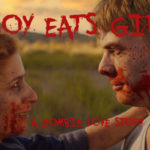 A short romantic comedy about two zombies who meet-cute while fighting over a dead woman’s intestines. Their brains have died…but not their hearts.

New England Connection: Both of our writers and our lead producer are from New England. The writers are Lauren Hynek & Elizabeth Martin (Disney's live-action Mulan), both of whom grew up in Massachusetts and met in high school while working at Shakespeare & Co in Lenox. Producer Liz Vacovec is from Winchester, MA and did her undergrad work at the University of Massachusetts, Amherst, then went to graduate school at Emerson College.

Director(s) Bio:: Sarah Gurfield’s screen credits include directing the first season of “The Donors,” a new digital comedy series for Lionsgate’s Laugh Out Loud network, executive produced by Kevin Hart. “The Donors” had over 1.3MM views in its premiere week! Gurfield also recently directed a new short film, “BOY EATS GIRL: A Zombie Love Story.” Her previous short film, “THUMB” screened at over thirty festivals and won a handful of Best Comedy awards. If you have six minutes, you can watch THUMB here https://vimeo.com/54628887

As a theatre director, Gurfield has worked primarily in New York and LA, where she is co-founder and resident director of Santa Monica Rep. Favorite productions include the world premiere of Steven Fechter’s THE COMMISSION (New York Fringe); I DO! I DO! (Berkshire Theatre Festival); A STREETCAR NAMED DESIRE and BAT BOY THE MUSICAL (Seacoast Rep); PROOF and THE COMPLETE WORKS OF WILLIAM SHAKESPEARE (ABRIDGED) for Santa Monica Rep. Ms. Gurfield is a director at The Actors Studio, an SDCF Award winner, and a member of SDC and AEA.