A nervous woman visits a hardware store looking to get what she needs to change all the locks on her house. She is assisted by a young unsuspecting clerk who tries follows his normal procedure for dealing with customers despite her questionable behavior.

New England Connection: This film takes place at Durfee Hardware in Cranston, Rhode Island which has been around since the 1930s. The director has worked in the store for more than a decade and has lived in New England for his entire life. The crew consisted of students who attended the University of Rhode Island as well as employees of the store.

Director(s) Bio:: Jared Jorge is a filmmaker and photographer from Cranston, Rhode Island. He recently graduated from the University of Rhode Island where he received his bachelor's degree in film media. His interest in filmmaking began with skateboarding and for him, it has since become its own fulfilling endeavor. 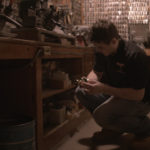