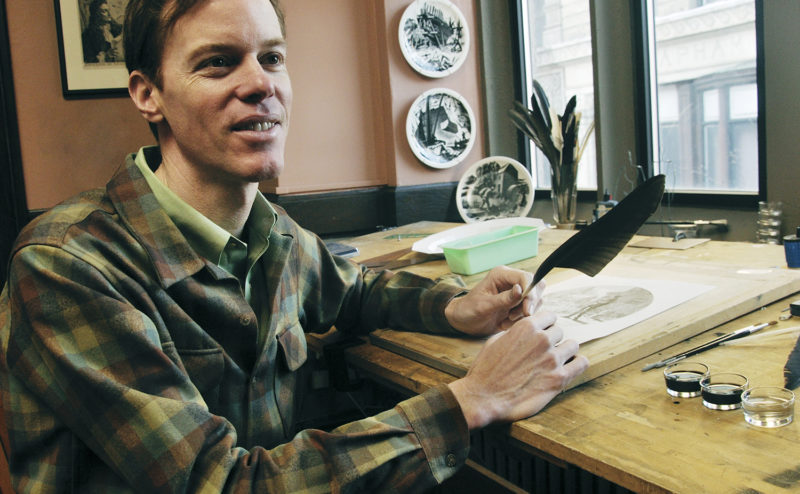 Richard Goulis takes his audience on a deep dive into a new form of ceramic art in Andrew Raftery: Autobiography of a a Garden on Twelve Engraved Plates

We caught up with filmmaker Richard Goulis about the inspiration behind Andrew Raftery: Autobiography of a a Garden on Twelve Engraved Plates.

Andrew Raftery: Autobiography of a a Garden on Twelve Engraved Plates was shot over a seven year period solely by filmmaker Richard Goulis. It has been shown at gallery receptions and lectures, and is now available for screening through the 2019 Online New England Film Festival. We caught up with Goulis about his unexpected journey into filmmaking and the artist who inspired the film.

Richard Goulis: Filmmaking was almost an accidental thing for me. I remember getting a toy kinetoscope as a gift. I was probably 4 or 5 years old. It was a little wheel with cards that each had a single frame of a film printed on it. You would put the cards into slots around the wheel and turn a crank to watch the cards flip by through a viewing hole so you could see Frankenstein and The Wolf Man walking around. That was the first time I realized that a film was actually little individual pictures strung together.

My older brother had a Super 8 film camera and we used it to fool around with recreating TV commercial spoofs and home movies.

I went to The Rhode Island School of Design originally for Illustration but switched to Film/Video because Illustration was full. I got there early before my first semester started and walked into the Film/Video office, unannounced, and saw something that changed my life forever: on the counter was a 1/2″ reel-to-reel video deck attached to a 10″ black and white monitor. The image playing was scratchy, blurry, barely recognizable; but I was transfixed by the images. This was the first time I saw television that wasn’t highly produced and slick and understandable.

I felt confused, but my mind was blown and I knew I had to be a part of this, whatever it was. I found out shortly that the video was footage shot at a student exhibition of photographs that was deemed by some authority to be objectionable and was being raided by police. That moment, in that office, began my personal journey of discovery into this powerful medium. I haven’t stopped since.

NewEnglandFilm.com:  What inspired you to make this film?

Goulis: Working with other artists has always been my favorite thing to do. I met Andrew Raftery through Dr. Joe Chazan, a local “Enabler of the Arts” (his term), whom I was working with and producing the NetWorks Rhode Island series profiling the work of selected Rhode Island visual artists. Andrew was one of the featured artists. He had begun work on a self-portrait project a little bit prior to that time.

When I finished Andrew’s profile for NetWorks, Dr. Chazan wanted to explore deeply the process of Andrew’s work on the self-portrait. That is what this piece is about. I followed Andrew over a seven year period.

NewEnglandFilm.com: What was the production process like for this film?

Goulis: This film was shot over a seven year period solely by myself. It is an intimate look at one artists’ journey and process. I wanted to make the artist as comfortable as possible during the filming and footage gathering process so I kept things at a minimum footprint production-wise. Things also had to happen rather spontaneously most of the time, and I had to scramble to a location at a moment’s notice sometimes. That can be difficult if you are coordinating crew members and lots of schedules.

NewEnglandFilm.com: What kinds of films are you working on now?

Goulis: I’m working on a film about The Steel Yard, an industrial arts community artist studio and educational facility in Providence, RI that is undergoing a major renovation at the moment. I am also working on a series of informational shorts for the Old Slater Mill Association in Pawtucket, RI.

Goulis: Fundraising is the biggest stumbling block and usually the largest hurdle to overcome for most filmmakers. It can be a real slog. It is a constant pressure for me if the work I am doing is not commissioned or privately funded. Those who have a ready supply of financing always have an easier time. I rarely work with actors on my projects as most of my projects are non-fiction based.

NewEnglandFilm.com: Anything else you’d like us to know about your filmmaking process?

Goulis: I consider myself an artist first and a filmmaker second, though the relationship is a symbiotic one of course. I am fascinated by the ability to create a moving image which is instantly available and easily manipulated and edited, mass produced and displayed. I enjoy creating new ways to incorporate a moving image into static objects and seeing how they interact. This has taken form in various installation performance pieces or found object sculptures using single or multiple channel video elements with theater.

Andrew Raftery: Autobiography of a a Garden on Twelve Engraved Plates is streaming now through October 14 as part of the 2019 Online New England Film Festival.