Director(s) Bio:: Richard Goulis is a multi-media artist and came to Providence in 1980 to attend the Rhode Island School of Design. He was the recipient of the RISCA Fellowship for New Genres and numerous RISCA project grants, as well as research and development grants from The Rhode Island Council for the Humanities. His performance work has been seen at festivals around the world and his video pieces are in the collection of The Museum of Art, Rhode Island School of Design, Corning Museum of Glass, and many private collections. Through his video work on the NetWorks series, he has showcased the work of selected artists in Rhode Island. He is the Founding Artist Director of The Worcester Artist Group, in Worcester, MA and was the Founding Artistic Director of The Harwood Art Center in Albuquerque, NM. 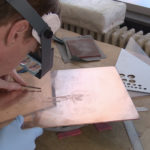