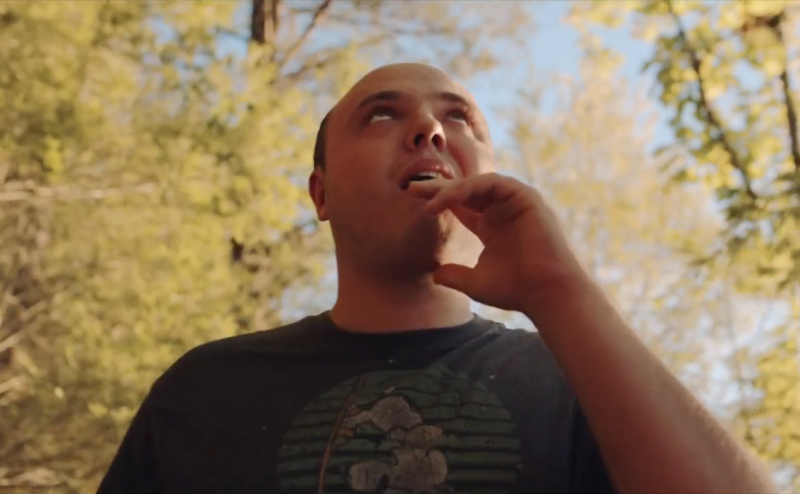 An interview with Tim O'Donnell about the familial inspiration for his documentary Pizza Birdy Bath Waterfall.

With his documentary Pizza Birdy Bath Waterfall, director Tim O’Donnell takes viewers inside the world of Tommy, a man with Landau–Kleffner syndrome—an extremely rare neurological disorder. In this interview with NewEnglandFilm.com O’Donnell shares how a harsh critique of his photography led him to become a filmmaker and how his sister inspired this film.

Tim O’Donnell’s career as a filmmaker originated from a slightly unusual place—intense criticism. A grad school professor’s detailed critique of his photography allowed him to discover a talent for filmmaking. Two years later he left his job as a teacher to nurture that talent, and now after seven years of honing that craft through a boutique production company he started, O’Donnell has released his latest documentary short Pizza Birdy Bath Waterfall.  The short follows Tommy, an adult suffering from a rare neurological disorder, and his caretaker Erin, who uses the tranquility of Walden Pond to aid in her communication with Tommy.

Screened at Independent Film Festival Boston, Pizza Birdy Bath Waterfall, is now playing through October 15 as part of the 2017 Online New England Film Festival. In this interview with NewEnglandFilm.com, O’Donnell reveals how the aforementioned critique of his photography led him to become a filmmaker, how his sister’s career caring for adults with disabilities inspired this film, and how he’s hoping to change the conversation about veterans with the film projects he’s developing.

NEFilm: When did you realize that you were a filmmaker?

O’Donnell: I was a painter getting my MFA degree at MassArt and got absolutely torn apart in a critique by Helen Miranda Wilson. I’m not kidding, there were several curse words thrown out and a lot of comparisons to unsavory things. She brought some students to tears. She’s an incredible woman and painter—and I admire her a ton. We had a one-on-one critique and she pushed me to open up and talk more about my process, which came from blurry photos I was taking. She kept pushing and I showed her a home movie I made. We watched that seven-minute film in silence and I was getting ready to be verbally beaten to a pulp. The film ended, and she turned to me and said “this is really hard for me to tell you right now, but you are a filmmaker and you just don’t know it yet.” Two years later, I left my teaching position to try this filmmaker thing. I’ve been lucky enough start a boutique production company (Pixela Pictura) and we’ve been going seven years strong at this point.

NEFilm: How did you find your cast for Pizza Birdy Bath Waterfall?

O’Donnell: It was super duper easy. My sister Erin is one of the subjects. We met 33 years ago. My mom and dad introduced me to her and we’re actually friends. Pretty cool. And she’s a caretaker and works with Tommy, the other subject in the film. No casting sessions necessary.

NEFilm: Where did the inspiration for your film come from?

O’Donnell: My sister Erin is a caretaker for adults with disabilities and has been taking care of Tommy for the past five years. As a former teacher we’ve had a lot of conversations about Tommy and the various techniques she uses to communicate with him. Tommy has Landau–Kleffner syndrome, an extremely rare neurological disorder with only 100 cases diagnosed every ten years. LKS is characterized by frequent seizures and sudden aphasia (the inability to understand or express language). Erin found Walden Pond to be a special place for Tommy. They go there every week. I’ve walked Walden with Tommy and Erin a bunch of times. Its an amazing experience to see Tommy open up and get so excited and to watch how Erin communicates with him. And after a few years I decided to bring my camera along.

NEFilm: What has been your favorite screening of Pizza Birdy Bath Waterfall?

O’Donnell: So far my favorite screening was at the Independent Film Festival of Boston. Tommy, the main subject, has difficulty in theaters so he couldn’t attend, but his entire family and extended family attended. We had over 30 people from Tommy’s clan. During the Q-and-A after the screening Tommy’s dad stood up, teary eyed, and said he works during the day so he never gets to go to Walden Pond with his son. And he then looked at Erin and me and said thank you. “Thank you for my first trip to Walden with Tommy. This film put me there and I’m so grateful.”

NEFilm: Are you working on any other projects now?

O’Donnell: We just finished our first feature-length documentary film, Not a War Story, about a group of veterans trying to make the first ever veteran-produced Hollywood film. They were sick of how their community was being portrayed as PTSD alcoholics or war valor superheroes, so they decided to make a movie that had a common thread with every veteran: dark humor. It’s a necessity that helps get you through trauma and stress. So they made a zombie apocalypse dark comedy featuring over 20 amputee veterans cast as zombies. It was an amazing experience getting to work with that amazing community and make a movie about a movie. Always fun. For more info go to http://notawarstory.com/.

We’re now in post-production finishing Life Without Basketball, a feature-length documentary film about Bilqis Abdul-Qaadir, the first Muslim-American basketball player to play at the Division I level while wearing hijab. She was sidelined for 3 years while there was a rule in place banning players from wearing hijab on the court. It has recently been lifted due to her efforts as an advocate. I’m co-directing the piece with my really good friend and longtime collaborator Jon Mercer. For more info check out http://lifewithoutbasketball.com/.

We’re working on an episodic documentary series on veterans called 22 for 22. We’ve already finished two of the films and finished production on another two. There are so many amazing and positive stories about veterans that we all need to hear. This is the veteran version of ESPN’s 30 for 30.

NEFilm: You have a lot going on! Anything less… formal that we should know about?

O’Donnell: My mother-in-law is a super duper cat lady (and I love it). Both her and husband are deaf and she found a way to teach her cats sign language. We made a video about it if you are interested in YouTube cat videos (I know you are).

NEFilm: What advice would you relay to the next generation of filmmakers?

O’Donnell: Just do it. It’s so stupid and cliche. But just do it. And I hope I don’t sound like Shia Lebeuof, but the best way to be a filmmaker is to make films. Not write proposals or treatments, but to pick up the camera you have available to you, even if it’s a phone camera, and make it. We all have to make a ton of really really really bad movies before we can make a few decent ones. It’s just the way it is. And also edit your own films. That’s a quick way to getting better. Be apart of the entire process before you go off and specialize in one area. You’ll grow way quicker that way. Oh and eat Jolly Ranchers. Especially the green ones. I’ve found that helps too.