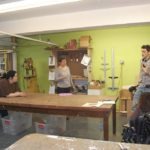 In 2001, Alex Truesdell started an independent non-profit called the Adaptive Design Association (ADA) with the mission that all children (and eventually adults) with “disabilities” would get the customized equipment and adaptations they need to participate fully in the community and achieve their full developmental, social, and academic potential.

Since then, ADA has established its home base in New York City, and has inspired numerous Adaptive Device Centers (ADC’s) around the globe. But the struggle to meet an often un-recognized need has continued to rage on. Unfortunately, in the United States, most children in need of support are either un-supported by their families, school systems, and/or communities.

Among the Giants is a short documentary film which tells Adaptive Design’s story through the tales of a few fascinating and courageous individuals, all of whom have had some relationship with ADA. The film challenges viewers to question the very nature of notions such as “disability”, and “capability”, as well as the unfortunate reality of “accessibility” in the United States.

Directed in 2009, the film continues to serve as a teaching tool around the world; it is ideal for classrooms, students, and educators of all age, as well as simply anyone who wishes to learn a little bit more about what it means to work with one’s hands, be creatively fearless, and question one’s own limitations.

Director(s) Bio:: Cory Tomascoff studied film in college and graduated in 2013. His first feature length documentary film On Guardian Mountain will be finished in 2015. He plans to move to San Francisco where he will embark upon a Masters Degree in Nursing.