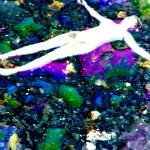 New England Connection: Krisanne Baker was raised on Cape Cod, mostly on the water. She has lived and worked on the Maine Coast for the past 20 years as an art educator and ecological art activist on behalf of water quality, water availability and rights. She attended Rhode Island School of Design for her BFA, and Vermont College of Fine Arts for her MFA. She is an Assistant Professor of New Media at the University of Maine Farmington. Her sculptural ecological art work and links to other art videos are at www.krisannebaker.com.

Director(s) Bio:: Krisanne Baker grew up on Cape Cod sailing myriad miles of New England waters with her father. Her love for the ocean and our connection to it as the basis of life is evident in the digital video ‘Upstream to Downstream (In Our Bloodstreams)’. She first encountered video production, but trained as a painter at Rhode Island School of Design in 1982. Baker’s more recent graduate work at Vermont College of Fine Arts forged together her love for the natural environment with her art. Now an Ecological Art Activist, her multi-media sculptures, drawings, and digital media works are specifically concerned with the sustainability of water quality, availability, and the rights of all creatures on this water planet. For the past 20 years, Baker has lived and continues to work on the Coast of Maine.