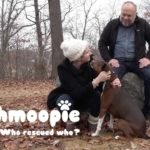 Mary C. Ferrara wrote, directed and stars in “Schmoopie,” about a woman, dealing with a breakup, gets an unexpected suggestion that changes her life.

Director(s) Bio:: Boston-based award-winning actress, producer, director and writer Mary C. Ferrara caught the acting bug in her late 20s when she took an improv class on a whim. Along with being in several improv and sketch comedy troupes over the years, Mary has done several plays and has 125+ independent film projects to her credit. Some of her favorite roles include Barbara in “August: Osage County,” Helena in “A Midsummer Night’s Dream,” Larissa in the web series “Family Problems,” Katie in the web series “World’s Worst Director,” as the woman in the short sci-fi film “The House,” Candy in the web series “Magicland,” and Debra in the short film “Cold.” She also has years of experience directing for film and theatre; in 2018 she got into producing with the award-winning short film "Candlestick Justice." Soon after she wrote, directed and starred in the award-winning "Schmoopie." Her script "Red Shirt" has been a selection in over 20+ festivals. She is now in production with "Wallie's Gals." A film she wrote about 4 women who reunite 30 years after working in a discount clothing store together.