The Best Way Is By Hand 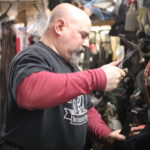 On a busy Saturday morning in Waltham, Massachusetts, seventh generation cobbler John Elhilow takes time to talk about the past, present and future of shoe repair. This short documentary takes you behind the counter and into the workshop as Elhilow plies his ancient craft in the modern world, saving the soles (and heels) of his customers.

Director(s) Bio:: Cathleen O’Connell is an independent documentary producer based in Boston and the founder of Desert Penguin Pictures. Her films shine a light on lesser known but important aspects of American culture – stories found when you pull off the interstate and explore the blue highways and back roads.