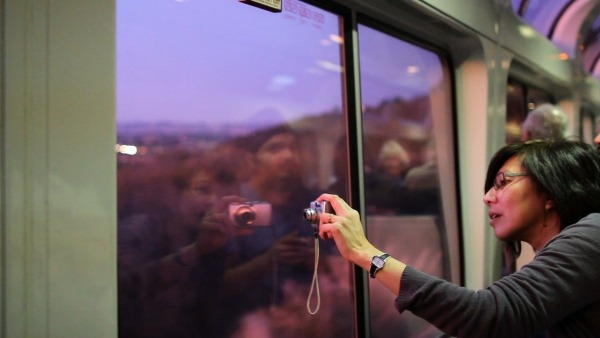 An Interview with Filmmaker Stephanie Rabins

Share
Fellow female filmmakers discuss work, life, and more in this new series, Females in Film. For this installment, NewEnglandFilm.com writer Catherine Stewart talks to filmmaker and educator Stephanie Rabins about her work as well as her recent move to New England.

I met educator, documentarian, and general all-round film maven Stephanie Rabins when she presented work at Green Shorts, an evening of short environmental films in Portsmouth, NH in late 2013. Rabins screened We Take The Train, a meandering fly-on-the-wall documentary about rail travel across America. As her first self-produced documentary where she undertook nearly every production role, We Take The Train is an exciting early-career creation from a filmmaker that is set to share more dynamic and thought-provoking work in years to come.

I spoke again with Rabins recently in order to catch up on her latest projects, and hear more about her move to New England. “I moved with my husband, for his work. I was worried about making films in New England, I’d been in New York for a long time.” Rabins studied at Hunter College in the Upper East Side of Manhattan, gaining a Masters in Integrated Media. “But I appreciated shaking things up a little and moving here. I didn’t want to wake up in five years still doing the same thing.”

Rabins is just getting her feet wet, meeting new people and making connections. “Collaborating is extremely important to me, I don’t work well alone. It’s important to find people with the same aesthetic and a similar attitude.”

Rabins’ recent work includes projects for the Boston Foundation, and a partnership with Lou Thomas to make “Remarks on the Unremarkable Public Spaces of Kendall Square”, which documents strange spaces in Boston. Rabins has also been working in post-production for television, alongside teaching but she craves longer projects, and full-time positions. “When you are piecing things together you learn a lot really fast, but I crave working with one team on a longer project. It may open up more time for personal work.”

Rabins came to film through a background in photography and music, finally piecing the two together by placing still images with sound recordings. “I really studied at the tail end of the analog era, and I didn’t use digital. I love stills – it’s my ancestral home, my first love. I wanted to tell stories in a deeper way by having recorded audio and putting it with a slideshow. I wanted to tell a story in 360º. Then I realized I was heading towards film.”

Rabins maintains a balance between her personal work, and jobs that pay the bills. But she doesn’t claim that it is easy. “It’s a hustle if you piece everything from the ground up. I’ve been lucky that I have a background in education. I love teaching and I feel it’s part of my creative process. I feel that I woke up one day and realized that freelancing is owning a business. I have to understand every part of my process in order to find work and develop as an artist.”

Rabins has also found support from her fellow female filmmakers. “We share equipment and we share jobs because it’s easier with women.” Although a lot of her support network still lives and works in New York, Rabins is slowly forming those connections in Boston and the surrounding area. But Rabins often finds that she is the only female on a set or in a production situation. I ask her why she thinks that is the case.

“I think that when you are young and you get into the industry two things are really celebrated and rewarded. Firstly, a real love for technical tools – gear, if you will – and another is an extreme form of confidence. The fact that you are willing to put yourself out there just based on your internal value. And, for whatever reason, girls are often less encouraged to pursue and excel in either of these areas.”

Rabins and I agree, however, that this is changing. Digital cinema is leveling the playing field, and more women are developing a love for filmmaking – gear included. The next generation of female filmmakers are emerging, us included, and we are excited to see what the industry looks like in years to come.

You can find out more about Stephanie Rabins on her website, http://stephanierabins.com.

If you are a female working in film in New England then contact me at catherine@filmunbound.com, I’d love to share your work, your views and our conversation here at NewEnglandFilm.com in a future Females In Film article.

You can find out more about Stephanie Rabins on her website, http://stephanierabins.com. If you are a female working in film in New England then contact me at catherine@filmunbound.com, I’d love to share your work, your views and our conversation here at NewEnglandFilm.com in a future Females In Film article.