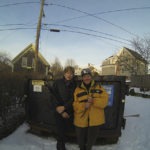 Mike Wright is a sculptor working in the rich tradition of scavengers on the tip of Cape Cod. She finds unusual pieces of painted wood in a dumpster outside Sea Barn, the former home and studio of the abstract expressionist painter Robert Motherwell. In a new sculpture she layers in Provincetown’s life as an important arts colony.

Director(s) Bio:: Marnie Crawford Samuelson is a documentary photographer and audio & multimedia producer. She was the photographer for The Wild Braid, a collaboration with poet laureate Stanley Kunitz and poet Genine Lentine, which was published by W.W. Norton & Company in 2005. Her photographs have appeared in magazines, including Newsweek, People, U.S. News & World Report, Smithsonian, and The New Yorker.
Crawford Samuelson has directed and filmed several short documentaries.
She lives in Jamaica Plain, MA and Wellfleet, MA. 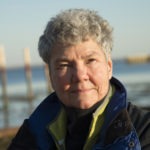