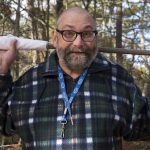 At ground zero of a deepening health crisis of tick-borne diseases, bug guy Larry Dapsis is fighting to protect his Cape Cod neighbors.

Director(s) Bio:: Marnie Crawford Samuelson is a documentary photographer and audio & multimedia producer. She has directed and shot several short doc films. She lives in Jamaica Plain and Wellfleet, MA.

Shane Hofeldt is an editor and filmmaker based in Camden, Maine. He works primarily in non-fiction and has numerous editing and directing credits. He collaborates with non-profit organizations developing and creating films that share their stories. Shane teaches editing and film production to youth and adults.