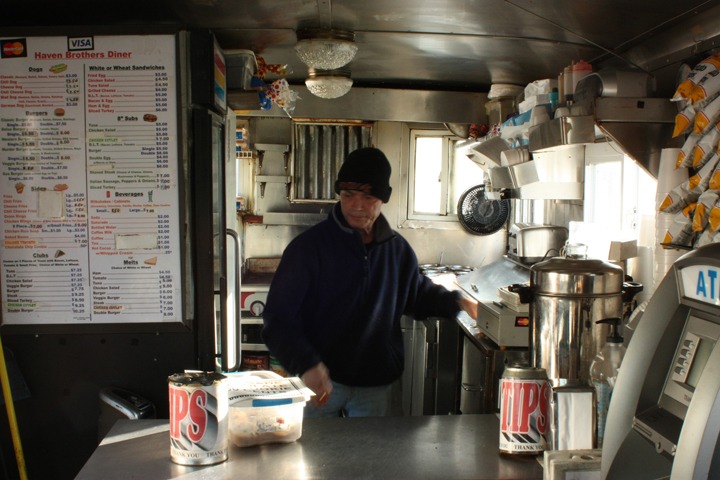 A Chat with Jeff Toste, Director of Haven Brothers: Legacy of the American Diner

Share
NewEnglandFilm.com chats with Filmmaker Jeff Toste about his directorial debut Haven Brothers: Legacy of the American Diner, a film about the oldest operating diner on wheels in America. The film screens in East Greenwich, RI on July 26 and at the Rhode Island International Film Festival on August 10.

Rhode Island filmmaker Jeff Toste showcases his directorial debut Haven Brothers: Legacy of the American Diner tonight, July 26 at the Greenwich Odeum in East Greenwich, Rhode Island (tickets at http://odeum.ticketleap.com/film/). The film, also accepted into the Rhode Island International Film Festival for a screening this August, documents the legacy of Haven Bros., a Providence institution that happens to be the oldest operating diner on wheels (120 years) and predecessor to the food truck. NewEnglandFilm.com spoke with Toste about his inspiration and his plans for the film.

Sam Cooper: I’m a New Englander but I was never aware of the Haven Bros. Diner until this film. Why did you choose it as the subject for your film?

Jeff Toste: I love roadside Americana. Buildings shaped like giant milk bottles or rockets. Haven Bros. is like that to me. But while the roadside visuals seem to be vanishing, Haven Bros. is alive and well.

SC: Did you have any trouble getting Haven Bros. to go along with the project? Were they supportive?

Toste: Initially they were unsure. There is not a lot of room near the grill. But over time they got to know me, and saw I was serious about the project. They have had a lot of profile pieces done over the years, but never before a feature film.

SC: Food culture in film and television is more popular than ever. Did this inspire you at all?

Toste: No. Their rise in popularity was a coincidence that happened to be in concert with my film’s completion. I don’t watch food programs. I am not a ‘foodie.’

SC: I imagine locals will really be interested in this film, but how about those who live outside of Rhode Island?

Toste: My goal from the beginning was to tell a Rhode Island story that would resonate not just within, but beyond the borders of RI. Universal themes of food, culture, history, work ethic, diet, success, gluttony and the American Dream are all a part of this film. So there is a large potential audience for those interested in such subjects. In addition, the film has a cast of characters unique to this part of the world. It’s not just a film for Rhode Island, but a film about Rhode Island.

SC: The response to your film has been really positive and is will be screened as part of the Rhode Island International Film Festival (RIIFF). Where do you plan to go from here? Any plans for future films?

Toste: I’m truly thankful for the local support, and now I hope to build on that. So my focus at the moment is film festivals and raising the funds to support promotion of the film at festivals. Many don’t realize how much time and money goes into just getting the word out! Also, by screening at RIIFF, I’m now excluded from many other film fests who want premiere status. It is a privilege to screen at RIIFF, so I’ve decided to focus on other festivals like RIIFF that have less restrictive premiere rules.

I’ll probably be spending most of next year just promoting this film. I have several film ideas I’d love to pursue, but a lot depends on how well this film does. It’s not easy trying to make a living in the arts.