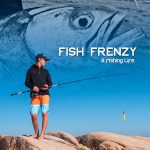 Join Gus in his latest Gus Outdoors adventure as he fishes along the coast of Rhode Island in search of search of Bluefish, Striped Bass & more.

New England Connection: Sean Nightingale grew up in Vermont and now lives in Rhode Island with his family. His son Gus, host of the Gus Outdoors Series, was born in Rhode Island and is presently in High School there. The program Fish Frenzy was filmed entirely off the the coast of Newport, Rhode Island.