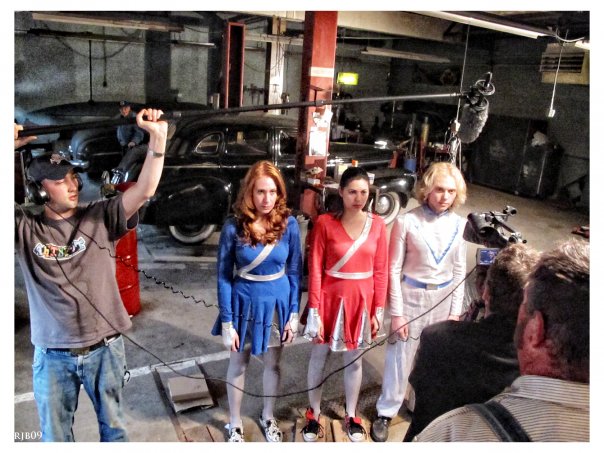 Share
Scorpio Film Releasing is preparing to premiere their seventh film, Atomic Brain Invasion, next month. The company, based in Rhode Island, appears to have found a successful formula for not only creating critically received films, but also obtaining distribution for them.

The co-founder of Scorpio Film Releasing, Richard Griffin began his career in television, working at a local station producing everything from “magazine-type” shows to commercials. In 2004, he left television and, along with his partner Ted Marr, formed Scorpio Film Releasing. He credits timing as part of the reason for their success. According to Griffin, in 2004, zombie movies and direct-to-DVD projects were booming industries and distribution companies were clamoring for them. The company’s first film, Feeding the Masses, was scooped right up. Although a zombie movie, Griffin says it is actually a socio-political satire that talks about post-9/11 America – something no other fictional movie had done at that point.

The company has been making movies steadily since and has built quite the following among the horror genre fans. However, not only do the fans love Griffin’s films, his films have also received favorable reviews from many of the horror industry’s influential publications. Griffin’s talents have even been compared to the late Italian filmmaker Lucio Fulci, who is highly revered in the thriller genre and is known as the “Godfather of Gore.” Griffin recently spoke with NewEnglandFilm.com about the company, as well his thoughts about today’s filmmakers.

Kerry O’Donnell: What is it about the horror/thriller genre of film that attracts you?

Richard Griffin: As a director, horror movies allow you to become very creative with visual in a way that dramas and comedies don’t. Like fairy tales, you can get a lot of the stuff under the surface. All good fairy tales have subtext. I like the fact that I can get a political message and a socialized message through my work. Atomic Brain Invasion, which is set in 1957, actually deals with racism.

KO: The last few films you’ve made have had a core group of actors in common, almost like the old studio days when they would have a stable of actors under contract. Has it just worked out that way or is there a reason for that?

Griffin: Not only are they a great group of talented people to work with, but we’re like a family. There’s a comfort level that’s developed, and a support system. And loyalty. I love to make films as vehicles for actors in order to showcase their talent. Nun of That was for Sarah Nicklin. Atomic Brain Invasion really shows what David Lavallee has. And our next film Disco Exorcist will let people see what Michael Reed can do.

KO: Your next film Disco Exorcist has been described as “a blood-soaked tale of revenge, sex, black magic, disco dancing, and mountains of cocaine.” What was behind the decision to film in Super 8?

Griffin: The movie is set in 1979 and is really what movies use to be like. The Super 8 film gives it a time machine effect. But really, I am so sick of this love of technology, with all the focus on cameras. The audience doesn’t care what the name of the camera is. What they want is a good story that is well told. Focus on what really matters. Put the money into the budget of the movie – not the camera rentals.

KO: What you think is being lost in filmmaking today?

Griffin: The passion; and the art are lost in films now. Clever ideas trump an expensive idea any day but people get hung up on the technology and not the storytelling. No one would pick up a guitar and declare themselves a musician, but for some reason, this is an art form that somebody can buy a camera, take it out of the box and call themselves a filmmaker.

Filmmakers also need to be pragmatic. Don’t try to make Hollywood movies for ten cents – basically making Twilight for $100,000. But Twilight cost $30 million and your $100,000 isn’t going to compete. What you have to do is make something different enough, yet is riding the wave of something. Sure we made Feeding the Masses at the height of the zombie movie craze, but it was a quality movie. That’s why it was picked up for distribution.

KO: So what advice do you have for filmmakers starting out?

Griffin: Ask yourself, what do you really want? A lot of filmmakers just want the fame. George Carlin talked about the “Aren’t I cute, aren’t I clever” syndrome that a lot of artists have, but you have to get past that. You do this because you love telling stories. It doesn’t matter if you’re a poet, a songwriter, an actor, a filmmaker, a sculptor – you are communicating to an audience an emotion. It doesn’t matter what that emotion is – angst, humor, sorrow – the audience doesn’t care about the technical aspects. They only care about the emotion they’re feeling.

For more information about the Atomic Brain Invasion premiere go to www.facebook.com//login.php#!/event.php?eid=113485982017587.

Richard Griffin can be contacted through www.scorpiofilmreleasing.net.

For more information about the Atomic Brain Invasion premiere go to www.facebook.com//login.php#!/event.php?eid=113485982017587. Richard Griffin can be contacted through www.scorpiofilmreleasing.net.