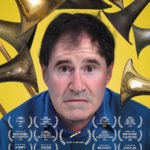 After the sudden passing of his wife, Stan (played by Richard Kind of Spin City, Curb Your Enthusiasm, Pixar’s Inside Out), ignores his overwhelming grief only to be faced with the unavoidable What Cheer? Brigade, a 20-piece punk marching band that floods his world with boisterous, interminable song.

New England Connection: The What Cheer? Brigade, based out of Providence, RI, was the inspiration for and are the stars of the film.

Director(s) Bio:: Michael Slavens (Writer/Director) graduated from NYU with a BFA in film production and started Five Eyed Films shortly thereafter. As well as What Cheer?, has directed and produced a number of music videos, industrials and commercials. In 2009, he produced and directed a collection of music videos for popular Kindie-Rock band, The Jimmies, entitled "Trying Funny Stuff." Other directing credits include a web-commercial for Picaboo Yearbooks and a book trailer for the New York Times best-selling YA series, Ghostgirl, involving stop-motion animation and miniature sets - all created from scratch. As an editor, he has worked for VEVO, AOL, The Huffington Post, and The New York Times, as well as on television shows, documentaries, and commercials. 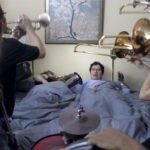