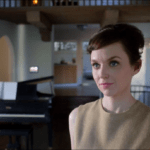 Capturing the unsettling essence of a Twilight Zone episode and the sci-fi tone of a Ray Bradbury story, this reflective short film casts a bleak look at how technology can backfire at bringing us closer together, unintentionally creating more isolation and loneliness than ever before, sometimes leading to harrowing and tragic results.

New England Connection: Tara Price (Writer/Producer/Actor) was born and raised in New England. She attended all the schools in Hampton, NH and performed extensively in the Portsmouth, NH theatre circuit before eventually relocating to Los Angeles. Her family still resides in New England where she returns to visit as often as possible.

A still from The Routine 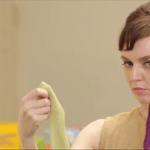