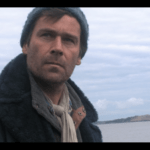 New England Connection: Not only were both filmmakers born and raised in Maine, the lead actor, Lars Christensen, also considers himself a "Mainer" these days -- although he originally hails from Copenhagen, Denmark.
The film was shot entirely in Machias and Lubec, Maine.

Director(s) Bio:: James Poirier and Travis Tyler started early.
They’ve been making films together since fourth grade, but only began winning awards in the festival circuit when they were freshmen in high school. They consider the first ten years to have been just practice, but in 2010, they formed their own production company: Tenth Gate Productions.
Having become old hands in the film festival circuit, the duo has been fortunate enough to receive national acclaim for their works.
"We are not filmmakers; we are storytellers"has become their self-imposed motto; they feel it has helped mold their cinematic style. The duo is always diligent to preserve a distinct and sincere storytelling quality in all of their work.