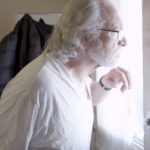 Adapted from a short story by Stephen King, Harvey’s Dream explores the blurred lines between perception and reality inherent to the rigors of Alzheimer’s disease. Harvey, suffering from the onset of Alzheimer’s, awakes from a terrifying dream and his wife Janet is left to confront the possibility that it is all too real. Providing glimpses into their past and present familial relationships, this short film captures a snapshot of a family dealing with the sad ravages of time.

New England Connection: This film is based on a short story by Stephen King, who lives in Bangor, Maine. The short was filmed in Bangor and most of the actors and crew live in Maine.

Director(s) Bio:: Ryan Shelley is a writer and director currently enrolled in the Intermedia MFA program at the University of Maine.