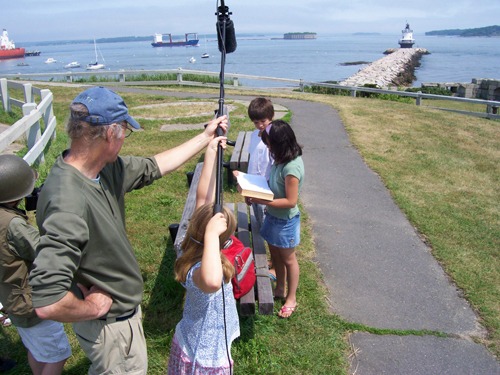 The Best Time You’ll Ever Have at Summer School

Share
Maine’s New England Film Academy celebrates its fifth anniversary by opening up a second location in Massachusetts. Director Christopher Watkins talked with NewEnglandFilm.com about the organization and its goals.

Fourteen years ago, when Christopher Watkins left his home in southern California and moved to Maine, making movies was not a profession to which he aspired. Although he grew up amidst the Hollywood film industry, it was actually what he refers to as the “Maine way of life” that inspired his creative juices. Discovering he had a talent for writing, Watkins set out to learn all he could about screenwriting and enrolled in a course at the University of Southern Maine.

But something was still lacking for Watkins. In 2005, with his own frustration over the lack of educational resources for aspiring filmmakers in the state, as well as his commitment to contributing to the success of Maine’s growing film industry, Watkins opened the doors to the New England Film Academy.

1. Junior Filmmakers Movie Week (Ages 8 to 10) – This program includes movie watching and critiquing, an introduction to storytelling and screenwriting, an animation workshop, camera basics, editing basics, and fun with acting.

2. Young Filmmakers’ Movie Camp (Ages 11 to 13) – This two-week program takes place at a mock movie studio, where each group produces a movie, from the beginning stages of putting the ideas on paper all the way to the “World Premiere,” and everything in between.

4. Teen Actor’s Workshop (Ages 14 to 17) – This two week program prepares actors how to act on-camera, how to audition, how to prepare for scenes, as well as how to work with various techniques and exercises. This group works closely with the Teen Filmmaker’s Workshop and have a chance to perform in the films that are made.

Now into its fifth year in Maine, Watkins is excited as the organization opens up a second location this summer on the campus of Bentley University, in Waltham, Massachusetts. Each of the programs offered at the Maine location will also be offered at the Waltham campus. Watkins shared how satisfying it has been to see, over the course of the last five years, students returning each year to learn the next level of the craft, and is confident that the same thing will happen at the new location.

He explained that within each course, each group has a lead instructor and several counselors. The lead instructors have both educational and working experience in the film industry. For counselor positions, Watkins said that the organization is always looking for film school students or recent graduates. He encourages anyone interested in working at the academy this summer to contact him.

This fall, Watkins hopes to branch out even further with his programs, starting in the Boston area. Working particularly in areas where there may not be affordable resources to help develop and cultivate prospective talent, Watkins is forging partnerships with organizations such as the Boys and Girls Club, to bring programs to these kids. Most will be full scholarships, so fundraising is another avenue that will be added to Watkins’s duty as academy director.

For any student who participates in any of the academy’s programs, Watkins shared this, “Even if they don’t become filmmakers, what they learn about teamwork, problem solving, completing a goal… are all invaluable life lessons they take away with them.”

Christopher Watkins can be reached at:
chris.watkins@nefilmacademy.org