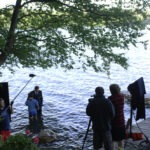 New England Connection: With the exception of the cast, nearly everyone involved in Unmoored is from the New England area. Production for the film took place in the Berkshires of Western Massachusetts.

Director(s) Bio:: Originally from Massachusetts, Director Marie Brown received her B.A. from The University of Puget Sound, where she was a double major in Theatre Arts and Music. Since joining the MFA Directing program at The University of Texas at Austin, Marie has served as the assistant director on Maria Irene Fornes's Fefu and Her Friends, director for Diana Son's Stop Kiss, Erica Saleh's Split, co-founder of an interdisciplinary performing ensemble collaborating to create The Psyche Project, and co-director of Unmoored, a short film written by Jenny Connell and Erica Saleh and produced by Trillium Studios. Marie lives in Austin with her husband, Craig, and their daughter, Morgan.
Yari Wolinsky has long aspired to be more than a c-stand. As a child, his father, a National Geographic photographer, brought him along on trips to remote parts of the world. At first Yari’s blonde hair and blue eyes worked very well to get the attention of the local people. But as his hair grew darker his tasks became more complex, including holding reflector discs to bounce the sun deep into mummy-filled tombs. He escaped these tasks by going to Bard College - where he received a B.A. in Asian Studies, completing for his thesis a documentary about the Heike Monogatari.
Yari now works as a freelance editor and filmmaker in the Boston area. Nearly every kind of project has passed through his computer, from feature films like The Aristocrat, to documentaries about capuchin monkeys and their human companions, to animations of dancing Issey Miyake blue jeans.
He is currently getting revenge by making his father handhold Arri hotlights for multiple takes of movie scenes. 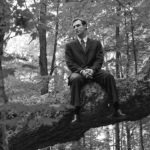