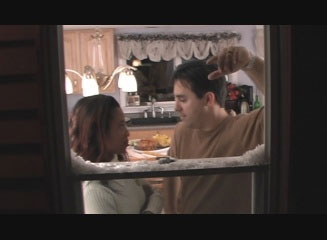 Ahh, the holidays. Who supposed at age 10 that the fun of the season could already be on the decline? That the parties, the gift-giving, even reuniting with long-lost family would feel so, uh, different as an adult? It’s not a feeling filmmaking trio Chris Tyrrell, Stacey Cruwys, and Tom Mariano counted on either. At ages 31, 31, and 36 respectively, they could be the last of the Holiday-Holdouts. Sure, Santa and Mrs. Clause may drink a little too much and flirt with the elves but in the end it all works out, right? "Of course," they would tell you, "Now sit down, get some damn popcorn, and enjoy the show!"

The show is "Naughty or Nice," the producing team’s first-feature length film, and it is a Christmas comedy, of sorts. The story takes place on December 23, 2005 in a modest Saugus home. An emotionally stunted couple hosts a Christmas party for their nearest and dearest, an ensemble cast of 12 local actors. Guests come ready to drink, ready to carol, ready to throw punches, and ready to play Naughty or Nice — a type of "truth or dare" party game which draws out a number of hidden conflicts.

There are humorous moments but the story is fraught with the drama of adult relationships, both the failings and the potential, not unlike the season itself. The filmmakers, similarly multifarious, pulled the film together in the midst of full-time jobs and with minimal resources. For this project, Tyrrell directs/produces/writes, is married to Cruwys, who writes/produces/acts, and Mariano produces/acts. Their in-person camaraderie is infectious, and when they talk of making lasting friends with the cast and crew, there’s no doubt it’s true. Catching up with the three of them (and Stacey’s Mom) one afternoon at JP Licks made NewEnglandFilm.com want an invite to their next party.

Erin Trahan: What themes did you want "Naughty or Nice" to cover?

Stacey Cruwys: All the holiday movies out there are for kids; they’re about happy times. But as adults, when you go home for Christmas, it can be stressful. Everyone starts disagreeing. You start acting like you did as a teenager instead of as an adult.

Chris Tyrrell: As you get older, there’s no more magic to Christmas. You have to make your own. We knew we wanted a happy ending. But one that feels like it’s a little bit of work to get to the end, that forces you to think about if you do have friends and family, that alone should be Christmas-y.

ET: What preceded "Naughty or Nice?"

Tyrrell: When we lost Project Greenlight several years in a row, we thought "Maybe we are less awesome than we thought."

Cruwys: We’d written other scripts and we decided that if we wanted our film made, we’d have to do it ourselves. So Chris and I were sitting in the living room trying to brainstorm ideas and I came up with an ensemble piece set during Christmas. We loosely based it more on the demographics of our friends and family than our actual friends and family. We wrote the first draft in about ten days.

Tyrrell: Then we re-wrote it obsessively for three years. But those first ten days flew!

ET: Did you all go to high school together?

Tyrrell: No. Would it be more impressive if we did? I wanted to get that one right. Stacey and I live in the same house. I was working at an environmental services company and the week after I started as billings manager they hired a new collections guy. His name was Tom Mariano. I went home to Stacey and said, "This new jackass just started." I could not stand him. But then we started talking about movies and Tom said he would love to be involved… [he points to Tom] Are you shaving yourself with that spoon? That’s disgusting!

Tom Mariano: No, of course not, I’m catching a drip. Now she is going to write that down. See what I go through? See what I get the whole time?

Tyrrell: Anyway, we wrote the script for "Naughty or Nice," with the ensemble cast, and another script, "The Joneses," about two sets of neighbors competing and eventually trying to kill each other. To help us decide which one to make, we posted a casting call on NewEnglandFilm.com. We figured if we could find 10 actors we really liked, we’d do "Naughty or Nice." If not, we’d do the Joneses. Something like eighty people responded. We also got our crew from NewEnglandFilm.com.

ET: How did you attack this when you had to make a living too?

Tyrrell: We started shooting on Saturdays in October 2004. Because everything happens in one house, we decided to start with one room. So we shot all the kitchen scenes and by the end of October we were like, "Oh my God! We’ve got to get out of the kitchen!" We realized that at this rate it would take us a year and a half, so we started shooting on Sundays too. And some Friday nights near the end.

ET: Did that help?

ET: What did you do for equipment? Did you rent?

Mariano: No we bought it. A Panasonic MiniDV 3CCD. It was the one place we spent money.

Cruwys: There was so much improvising; you never knew what you’d have to do. We used this six-arm lamp…

Tyrrell: It was a $20 Target light, which we got on clearance for $3. You know with all those flexible arms? We called it "Doc Ock."

Mariano: But it worked great because you could just bounce light off the wall, especially in small spaces.

ET: Technologically, what would you do differently in a future project?

Cruwys: We’d get a dolly or crane for more camera movement. Also a 24p camera. Or a Canon XL2.

Mariano: If we put all the equipment we used in one room, and people asked, "What did you shoot with?" They’d be like — yeah, right. Get out of here!

Cruwys: I was obsessed with the mic. I wanted to put it down the actors’ throats to make sure we got good sound.

ET: I didn’t notice any sound glitches. Did you have to dub?

Tyrrell: The mix was a painstaking process. The last few months we’ve been obsessed with audio. Stacey, Tom and I have seen so many films dubbed poorly. You always notice it. So we ended up reshooting a lot of stuff.

ET: It’s an ambitious soundtrack. Did you have trouble securing rights?

Cruwys: Most of the songs are in the public domain. Chris’s brother did some versions of the carols, the others we got for small fees. Except the Wham! song. It cost like $600 to have the characters to sing it for three minutes.

ET: So you edited this entirely on your own? And this was your first time editing?

Cruwys: We did it on our home computer using Adobe Premiere.

ET: Did you all get along? Because I was wondering, what happens when this many smart-asses try to make a movie together?

Tyrrell: It’s not always this joyful. We do have a strategy. If you agree with Stacey you’ll probably be part of the winning team. So Tom and I just switch off. When I feel adamantly about something, I wait to hear what Stacey says.

Mariano: Stacey kind of holds us together.

Tyrrell: She’s like the unsung hero, designing the poster, designing the website, burning the DVDs, figuring out how to use every software program. She does not let not knowing how to do things get in her way.

Cruwys: Since Chris and I live together, it’s all we talk about!

ET: Would you opt for different roles for the next project?

Tyrrell: I think Stacey and I would co-direct. Make it official, since she did half of the directing anyway.

ET: If your job was to interview each other, what questions would you ask?

Mariano: How many sleepless nights did you have?

Tyrrell: I slept great. Like a baby. I was a nervous wreck but sleeping wasn’t a problem. I would ask Tom, which role did you like best — actor or producer?

Mariano: Producer. But I don’t mind acting if the role is right. I like both. I’d like to do both. It’s nice to play somebody else.

Cruwys: But all you’d ever say is, "I’d never say that!" I’d like to know what you two would do differently and what you’d do more of.

Mariano: I’d like to spread out the work. You two took a lot on. I wish I was more involved with editing.

Tyrrell: I have a long list. Overall, I would’ve asked for more help along the way. I would’ve tried different things, been a more creative director. Thankfully I have a crutch, whom I married. She’s prettier than a crutch.

ET: Do you have plans to enter festivals or try for distribution?

Tyrell: Yes, our thought is: Please, please, someone distribute us. I can die happy if we can order this movie on Amazon or NetFlix. But seriously, one of the things I’m most proud of is hearing the cast and crew rave about how it was the greatest experience for them. We kept inviting them over every weekend because we were suffering from empty nest. It was the experience that when we started we always wanted to have.

Mariano: It’s funny, people ask me, how did you shoot that one scene with the mirror, or something. I tell them, it’s a secret, or you’d be the one making movies.

Tyrrell: Yes, everyone is just one hint or trick away from being a filmmaker.