New England Connection: Anya Belkina received her BFA at the Rhode Island School of Design. She currently lives in Boston, where she teaches drawing and 3D animation at Emerson College.

Director(s) Bio:: Born in Moscow, Russia, Anya Belkina began her art training at the Moscow Art College In Memory of 1905. She earned her Bachelor of Fine Arts degree from the Rhode Island School of Design and her Master of Fine Arts degree from the University of California in San Diego. Prior to 2007, Belkina held the position of Assistant Professor in the Practice of Art at Duke University. She is currently teaching drawing and 3D animation at Emerson College, where she is Assistant Professor of New Media. Belkina’s paintings are held in private and corporate collections throughout the United States. Her work in the area of new media has been presented nationally and abroad at conventional exhibition venues as well as in the form of large-scale site-specific installations, video projections, broadcasted media and cover art for literary journals. Her award-winning animated shorts have screened at numerous national and international film festivals. 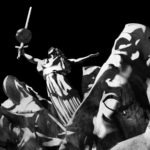