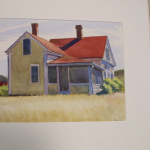 Edward Hopper & Marshall’s House is a short visit through five generations of a family’s history, focusing on the artist who captured their home one sunny Fall morning in 1932. Edward Hopper revolutionized the illustration of light for artists in the 20th century. His painting of the Marshall house in South Truro, MA., Cape Cod is perhaps the most telling instance of his technique. A meditative short film, Edward Hopper & Marshall’s House presents how the concept of family and an artist’s work can reach beyond the confines of a period.

The idea for a film about Marshall’s House started in the fall of 2015. My wife, Susan, and I had been invited to stay at our friends, John and Susan Marshall’s family house in South Truro. Somewhere in the conversation John mentioned rather casually that Edward Hopper had painted a watercolor of the house in 1932.

I had a “wait a minute, what?” moment hearing that.

I knew very little about Hopper’s time in South Truro so, just like in Hopper’s painting “Rooms by the Sea”, finding out about the “Marshall’s House” painting made the door swing open and in came the sea and sky.

I ended up bringing a camera along on trips over the following two years, not really knowing how a film would develop.

I initially tried an art-focused approach about how the Hoppers would drive around Wellfleet and Truro and stop to sketch from the back seat of their car.

Over time, rough cut edit after rough cut edit led to reduction: reducing the art facts and the historical details of Marshall’s house and the region.

The strength of the story for me became the connections between the painting itself and the Marshall family’s five generations of love for the house. Marshall’s House is quiet, a place of reflection due to the family treasures and generations of photos.

It is settled in time—not frozen. John told me he sometimes thinks he hears Red Sox games from his grandmothers’ radio floating in the wind.

John’s mother, Joan told me that after years of looking at posters and postcards of “Marshall’s House” she saw it for first time at the 2007 Hopper Retrospective and promptly burst into tears.

I realized I needed to advance this film from being not just a montage of lovely Cape Cod shots. It needed the art of Hopper and the thoughts of those who could help tell this story. I needed the financial means to make it all come together. The Robert P. and Arlene R. Kogod Family Foundation made that happen.

The plan became to make a short film, make it available to museums, art galleries—anyplace and anyone who wanted to show the film and to share it with film festivals worldwide.

Director(s) Bio:: Bob Burnett creates documentary and media productions for a wide range of foundations and public policy organizations. Bob has received more than 150 film festival and industry awards for his previous work as Creative Director for GVI, Washington, DC and as a producer/director. The short film, "The Art of Richard Thompson" screened in film festivals worldwide.