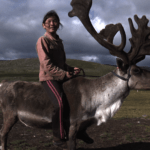 Mongolia is at the cusp of incredible growth, as its enormous mineral wealth is suddenly discovered and exploited by the western world. It has been called the Kuwait of East Asia. Billions of dollars are pouring into this land of less than three million people, whose population until recently was largely nomad. Can this traditional rural civilization, with a love for the land, withstand the muscle of the mining industry, as it tears up the countryside in a helter-skelter effort to maximize its sales, largely to China? Is Mongolia selling its birthright and future to the Chinese market? Greed, graft and corruption are lurking dangers — and yet, no one can deny that, if properly managed, Mongolia’s future has much to gain.

New England Connection: Ed spent a good part of his youth in New England, attending Phillips Academy in Andover Mass, and then graduating from Harvard. After completion of his military service in 1958, he entered the US State Department Foreign Service, where he served in Senegal, Guatemala, Colombia and Canada, interspersed with several Washington DC assignments. Two of the latter were on inter-agency assignments to the Peace Corps, during which time he saw the PC grow from less than a hundred volunteers to over 6,000, and oversaw the establishment of the UN Volunteer Corps. During the time with the State Department, and subsequently while he worked in the US Senate, he and his family established official residence in the state of Vermont, where to this day they maintain a home.

Director(s) Bio:: After some 18 years in the Foreign Service, Ed decided to enter the political world, and for the next five years he worked as legislative director and Chief Counsel to Senator Max Baucus of Montana. Finally deciding after five more years it was time to leave Government, Ed went into the language school business, and over the next 25 years, he expanded his school to become the largest in the DC area, teaching over 100 languages, many under government contract to almost every US agency involved overseas. His love for foreign affairs led him to open schools in Japan, Mongolia and Vietnam.
It was the Vietnam experience which challenged him to produce his first film: Vietnam -- The Reconciliation. The venture turned out to be enormously successful regionally. The Vietnam TV network broadcast it worldwide, and on the anniversary of the end of the war, broadcast it a total of eight times including prime time nationally in Vietnam. The US military nominated it for its Hulu network. His second film was very local in nature, but quite interesting: it was entitled Polo – For the Love of Elephants, and reported on the world cup competition in northern Thailand.
However, he was drawn back to Mongolia, a country which he had grown to love and which continued to fascinate him, by forthcoming general elections. Mongolia had emerged from 75 years of Soviet domination and was struggling to gain its democratic feet. Its economy was changing rapidly and radically. From a very poor nomadic nation, the sudden awareness of its enormous hidden mineral wealth attracted the world’s attention. It became known as the Kuwait of East Asia. But these developments also brought great concern; for example, foreign investment was creating the world’s largest copper and gold mine -- in the middle of the extremely fragile environment of the Gobi desert. Mongolia’s huge neighbor, China, seemed to threaten Mongolia’s very independence.
It is this dilemma that prompted the production of the film about mining’s challenge to Mongolia’s traditional civilization. On the one hand, the country faces the wonderful prospect of wealth and modernity, and on the other hand it faces true environmental challenges, not to speak of the great fear of growing corruption, enormous wealth for the few and continuing poverty for most. The film poses the question of how Mongolia will handle these challenges.
The film appears to have had its intended impact on Mongolia; as elections approached, Facebook reported that close to 500,000 people had come in touch with the film, and some 90,000 have “hit” it. This is pretty good for a country with less than 3 million inhabitants. The President himself allegedly commented favorably about it. It is Ed’s greatest satisfaction to think that possibly the film may have had a positive impact on the future of Mongolia. In the very recent aftermath of the elections (they were held end of June), it would appear as if the new administration there is off to a good start.