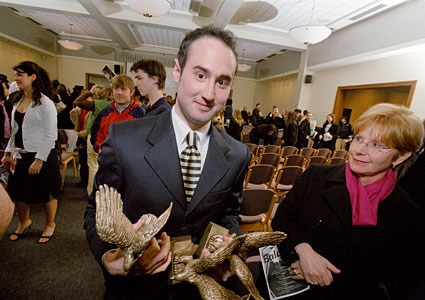 Share
The future looks bright for recent Baldwin Award-winner and soon-to-be Boston College graduate Harrison Wilcox, who talks about the advantages of going to film school in New England, the enemy of creativity, and getting ready for the real world.

When Harrison Wilcox dons his cap and gown this month for Boston College’s commencement ceremonies, it is likely he will look back and recall his recent experience winning three awards at the college’s first annual film festival as one of his fondest memories. In March, Wilcox’s student film "Before the Styx" was honored with awards for Best Screenplay, Best Drama, and Best Picture of the Year at the school’s Baldwin Awards. The awards, which are judged by the school’s Fine Arts and Communication faculty, are given to the best student filmmakers in 13 categories. Wilcox was the only one to win three awards.

The success of "Before the Styx," a short film about a young man trapped in limbo, has given Wilcox a reason to hope that this is just the beginning of an accomplished film career. Unlike his film’s lead character, however, Wilcox is not troubled by uncertainty. He has set a determined course for himself, one that — not surprisingly — will take him to Los Angeles, where he has a few production assistant jobs lined up. He plans to leave right after graduation, pending a possible summer job opportunity at New York Film Academy Harvard, where he interned last summer. "If I get that job, I’ll most likely go out to L.A. at the end of August. Otherwise I’ll leave one or two days after graduation. Just pack up and go."

Wilcox is sure to be just one of many heading west this summer to pursue their dreams — the trek to Tinsel Town is especially well trodden. Armed with a film school degree, hands-on experience, contacts in the film industry, and three Baldwin Awards to boot, odds are good that this young aspiring filmmaker will find the journey more worthwhile and fulfilling than most. NewEnglandFilm.com caught up with Wilcox at BC to talk about the significance of his film school experiences, and what he hopes to accomplish in the future.

KS: Tell me about your experiences at Boston College’s film studies program.

Harrison Wilcox: BC’s film studies department has only been around for six years, but from what I’ve seen from other schools in Boston, I know we are on par with all of them. While BC’s department is very studious and structured, it also probably gives its students the most freedom to make their own film projects.

My professor Mike Civille, who taught me everything I know about filmmaking, sums things up nicely with this Orson Welles quote: "The enemy of creativity is no limitations." We might not have all the fancy equipment that other schools do, but this forces us to be more creative. We know how to improvise and make last-minute adjustments so that when we get out and film in the real world, we’ll be ready.

The department is still pretty small — I think we have around 40 seniors graduating this year — but the professors are well known in the community and very knowledgeable. [The students] all get personal attention from the professors, which you won’t get at the larger schools out in L.A. or New York.

KS: Some people believe you can learn everything you need to know about filmmaking in 24 hours, and that there isn’t much value in a film school education. What are your thoughts about this?

Wilcox: I suppose you could learn everything about filmmaking in 24 hours — maybe with a seminar or a book — and then you could go out and make a film. You’d be a filmmaker, simple as that. But your film probably wouldn’t be very good. Filmmaking is a learning process; you need to get out there and shoot stuff and have people tell you what you did right, and what you need to fix the next time around. You can learn how to make a film in 24 hours, but it takes much longer to learn how to make a good film.

KS: What is the most significant thing you’ve learned in film school?

Wilcox: I’ve learned that no matter how great the equipment is, or the technical aspects, or the budget, the story is the most important thing. Without a good story the rest of the process is meaningless.

KS: Do you think there are advantages and/or unique aspects to studying film in New England?

Wilcox: In all the film projects I’ve done there have been so many people willing to work not for money but for the artistic value of the film. People in New England are just so positive and energetic. There really is an understated underground of filmmaking in New England that I love and will miss when I move to L.A.  And of course the physical landscape is so unique and interesting. I’ve done most of my shooting in Newton, Needham, Dover, and Wellesley. The amount of diverse and varied locations in the area is limitless.

KS: You recently won three awards for your film, "After the Styx." Can you talk a bit about this film?

Wilcox: Originally the film was for a class titled Filmmaking II. Emily Weissbach gave me a script about a young man trapped in limbo. She approached me and said that she wanted to change a lot of things, but she let me run with an idea of the River Styx and Greek mythology. I did a lot of research and incorporated the boatman Charon, coins over the eyes of the dead, and other things in the film. I then sat down with Emily and we rehashed the whole thing.

When my crew for the film, Ollie Grigsby and Jay O’Meara, were with me touring locations in Needham, MA, I told them I wanted this film to blow all the other Filmmaking II films out of the water. Twelve projects later, they are still the best crew I’ve ever worked with. We shot for three days in 112-degree weather during marathon weekend in an attic apartment on Commonwealth Avenue in Chestnut Hill, then overnight on the streets of Needham. The Needham Police gave us permission to shoot and were really great about the whole thing.

At the end of Filmmaking II the students voted on the best films, and "Before the Styx" swept the class awards. Ollie had graduated and moved to L.A., so Jay and I re-cut the film, ran it through Magic Bullet After Effects, took out the dialogue, added script over the original opening credits, and changed the song twice. We then submitted it to the BC film festival, and were honored to win Best Screenplay, Best Drama, and Best Picture of the Year. The whole thing was really an amazing experience.

KS: What are your thoughts about the current popularity and accessibility of digital video technology versus film?

Wilcox: Digital filmmaking is great. It doesn’t look as good as film, but if you have a really good script, it doesn’t matter. Digital allowed me — with a very limited budget — to go out and make 13 films of various lengths in my last year of college. If I had to rely on film for all of those projects, either on 8mm or 16mm, I would have only been able to make one or two films.

KS: What in your opinion is the most challenging aspect of filmmaking?

Wilcox: The biggest challenge I come across in filmmaking is finding a way to captivate an audience.  Audiences are so used to big-budget, big-screen films that it’s hard to make them forget all that and appreciate the story. And also the challenge of finding a script that is unique and interesting.

KS: What is your favorite thing about making films?

Wilcox: I love everything about it. I have a small production company that I started up with my partner, Jay O’Meara. We do small jobs: commercials, weddings, stuff like that, but we also produce short films or segments from longer film scripts that we then show to larger production houses as film/script ideas for sale. Sometimes Jay will be with me on set, and I’ll lean over and say to him something like:  "I could do this all day. I mean 24 hours a day. Just keep cranking… block, light, rehearse, shoot, until there is nothing left to film." It’s the same thing in the editing room: capture, sync, cut, print. I could just do it on and on forever and nothing else and be perfectly happy.

KS: What is your ultimate career goal?

Wilcox: I’d like to end up in a position where I can make creative decisions on a film project. Direct, write, produce, DP, or edit. I know that’s what everyone wants to end up doing, but most of all I’d like to direct. I want to show the culmination of whatever talent and skill I might have to a larger audience, and hear what they have to say about my film or myself as a filmmaker. I have a magnet on my refrigerator that a friend gave me that says "I wanna direct." I look at it every morning when I make breakfast. It keeps me on track.

KS: Do you have any projects currently in the works?

Wilcox: I am currently editing a short film titled "After June," which was directed by one of my professors, Mike Civille.

KS: Do you think you will ever make a film in New England again?

Wilcox: I do have serious hopes to come back and work in Boston in the future. L.A. is just so different from here; I think that’s what appeals to me, the change. And the fact that there are so many places in the country that are a whole lot more accessible to me if I’m in L.A. as opposed to Boston.

My production company partner, Jay, hasn’t decided if he is coming to L.A. or not, but if he doesn’t he’ll be in New York. We sometimes joke about having East Coast and West Coast offices, which is something we can laugh about at this stage. But if we keep at it, who knows?

To view Harrison Wilcox’s film, "After the Styx" and learn more
The Baldwin Awards, visit www.bc.edu/baldwin.

For a slideshow from the Baldwin Awards and access to watch the films, visit www.bc.edu/publications/atbc/features/celluloiddreams/.