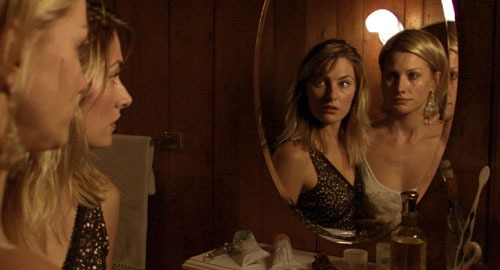 Share
New York filmmaker Elizabeth Puccini explores the transition between youth and adulthood in her first film 'Four Corners of Suburbia' shot in Maine and screening this month through Film North.

Elizabeth Puccini’s film "Four Corners of Suburbia" centers around five young adults who are questioning the paths their lives have taken and are struggling to make peace with their choices. Walt Samson, a teacher and husband with two children, is reawakened to the passions of his youth by another woman. Attempting to save the marriage, his wife Rachel arranges a vacation for her and Walt at her parent’s summer house in New England. Her plans are derailed when Walt invites his childhood friend Benjamin to join them. With the added company of Rachel’s beautiful friend Susan and her boyfriend to the remote location, relationships go awry as personalities clash and resentments surface. The group is forced to face the results of their past actions and decide whether or not it’s too late for change.

NewEnglandFilm.com met up with Ms. Puccini near her home in the East Village to discuss her first film, "Four Corners of Suburbia."

Upbeat and enthusiastic, one is immediately taken with Puccini, who bears a strong resemblance to Janeane Garofolo. She discusses her recently finished film with a balance of excitement and observations about first-time filmmaking and the multiple good fortunes that made the project possible.

"Four Corners of Suburbia" started its life as a play, directed by Elizabeth’s friend and Master Teacher of Acting at Circle in the Square Repertory, Alan Langdon. The play enjoyed a successful run at The 30th Street Theatre (New York City) and was named First Runner-Up in the Women’s Division at Stage’s Repertory Theatre’s 2001 Southwest Festival of New Plays. Puccini was told by friends and colleagues that the play was meant to be a screenplay, and so after some debating she began to adapt it for the screen. This was a project of several months, which required changing the rhythm of the script, and shortening it from two hours and 10 minutes to one hour and 44 minutes.

Puccini worked as production manager on a short by Mike Dolan in order to gain more experience working in the film world before beginning her own project, and then was elated to land the job of researcher for Julia Roberts’ movie "Mona Lisa Smile." It was the perfect medium for gaining the knowledge she needed and Puccini saw it as a sign to move forward with "Four Corners of Suburbia."

A second sign that the time was right came shortly thereafter, when a friend who heard of Puccini’s plans for adapting her play offered her parent’s summer home on Bailey Island as the location. This island off the beautiful coast of Maine fit exactly the script’s description of the location as ‘a small New England island.’ Money was raised relatively quickly through people who had seen "Four Corners" in its play form and it was time to locate a co-producer who was as passionate about the project as Puccini. She found the perfect fit in Louise Fenton, who had experience organizing the budget and production of a film, and had worked with Double A Films and Keep Your Head Productions.

Louise brought veteran casting director Adrienne Stern onboard, who was able to secure the British talent that Puccini felt the film needed. Though based on the American philosophical movement of the Transcendentalists, she saw the film as European in tone, angst-ridden young adults looking for meaning in the lives they’ve chosen and deciding if it’s too late to change course.

The cast and crew headed for Bailey Island, for what was to be a 22-day shoot. With three houses next to each other used to house and feed the crew, time was saved by eliminating the need to constantly travel to and from the set. Thanks to good chemistry amongst the cast and the generous hospitality of the New Englanders, the shoot was successful, if a little tiring due to the number of scenes that take place at night. Again Puccini feels as if luck was on her side, as the budget was too tight to allow for anything not to go as planned.

Next came post-production which already had a potential hitch. The film had originally been budgeted for a miniDV shoot, but due to the insistence of cinematographer Antoine Vivas Denisov that it be shot in high-definition, money that had been reserved for post-production had gone to the camera. With Denisov’s promise that he would help get the film finished at a lower cost, he got the camera, a Panasonic Varicam that shoots 24 frames per second.

Denisov made good on his promise, convincing Puccini to travel to Athens, Greece to work with composer Nikos Kypourgos on the score for the film. One of the leading composers of Greece whose orchestral piece wrapped up the 2004 Olympics, Kypourgos was able to record and mix the score with a small chamber orchestra for a budget of $3,000.

After editing was completed by Frank Reynolds, known for his work on many character- and dialogue-driven award-winning films, Puccini embarked on another trip, this time to Poland to work with cinematographer Krzysztof Ptak on the color-timing and film transfer. Puccini found him to be one of the best cinematographers in Europe, who had won the prestigious Camerimage award for "Best Cinematography" in 2002 for a film he shot called "Edi." The emotional tone of "Four Corners" was greatly enhanced with the addition of his sharp color contrasts and pensive tones.

While "Four Corners" does the rounds of film festivals, Puccini is nailing down distribution and working on her next screenplay, "Trinity," which centers around a young woman’s battle with borderline personality disorder and issues of abandonment.

‘Four Corners of Suburbia’ will screen through Film North on May
18 at 7:30 p.m. (Doors open at 7:00pm) at Patriot Cinemas (www.patriotcinemas.com)
in Museum Place Mall, Salem MA Present for discussion following the screening
will be director Elizabeth Puccini, cinematographer Antoine Vivas Denisov, and
executive producer Loren Runnels.  For more information on the film go to www.4cornersofsuburbia.com.
For questions about Film North and the screening, contact filmnorth@beverlymainstreets.org
or 978-922-8558.

'Four Corners of Suburbia' will screen through Film North on May 18 at 7:30 p.m. (Doors open at 7:00pm) at Patriot Cinemas (www.patriotcinemas.com) in Museum Place Mall, Salem MA Present for discussion following the screening will be director Elizabeth Puccini, cinematographer Antoine Vivas Denisov, and executive producer Loren Runnels.  For more information on the film go to www.4cornersofsuburbia.com. For questions about Film North and the screening, contact filmnorth@beverlymainstreets.org or 978-922-8558.