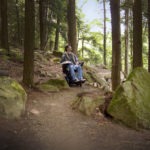 The Crotched Mountain network of over four miles of gently sloping, fully accessible trails allows anyone to experience the natural world, enjoy the companionship of friends, or seek solitude in a place of extraordinary beauty. From a summit trail with views over three states, to a wetland bog, the Crotched Mountain trails beckon hikers of all abilities.

Director(s) Bio:: Michael Havey is lead art director at Yasvin Communications in Hancock, NH and has produced and directed documentaries, corporate films and commercials. He was DP and steadicam operator on this film.