Fallout is a film about two brothers hiding for their lives in an old family fallout shelter. 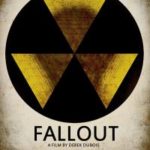