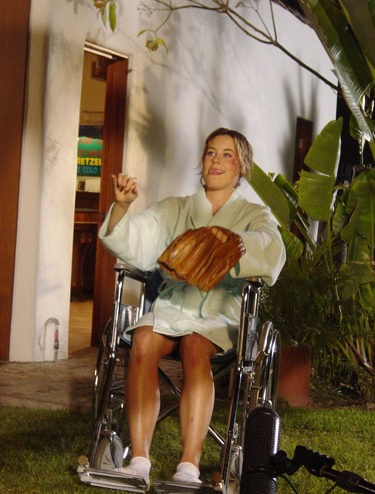 Taking on a New Role

Share
Patty Meyer talks about adding another hyphen in her title as producer-writer-director for the short film, 'The List' which screened this June at the Boston International Film Festival.

Los Angeles producer-writer-director Patricia K. Meyer’s career is a study in cross-country travel (not to mention hyphenation). A Los Angeles native, Meyer attended Harvard and Boston University only to return to L.A. upon completion of her studies. But recently, she returned to Boston for the screening of her short film "The List" in this year’s Boston International Film Festival. The festival ran from June 24-27, 2004, and Meyer’s film screened Friday, June 25 along with a number of other shorts.

Meyer’s pedigree is one any filmmaker would covet. Her grandfather, Nate Blumberg was the president of Universal Studios from 1938-1952, and her father, Stanley Kramer was a longtime film and television producer, principally known for the movie "Dragnet" and the subsequent television series. At first however, Patty Meyer had no intentions of working in the "business." She came to Harvard, and a year after that added a master’s degree in fiction writing at Boston University. Thoughts of writing the great American novel pulsed in her mind when she completed her studies, but a change of heart saw her return to L.A. where she became a third generation Hollywood film producer.

After a year’s stint at Bantam Books, Meyer took a job at Warner Brothers and learned the ins and outs of script development, pitching, and the studio system. She moved over to Tri-Star Pictures and spent several more years in varying levels of film and television production. Again, Boston would play a crucial role in the evolution of her career. "I had gone to visit a friend from college in Boston," Meyer recalls. "I was at Logan, waiting to catch a plane back to LA when I picked up a book." The novel was The Women of Brewster Place by Gloria Naylor. "By the time the plane landed at LAX, I knew I wanted to option the book to produce the movie version," Meyer states fondly. "The Women of Brewster Place" starred Oprah Winfrey and earned an Emmy nomination. It also launched Meyer’s career as an independent producer. Her next project was a film titled "This is My Life," the first film directed by mega-directing talent Nora Ephron and starred Dan Akroyd.

After a few more projects, Meyer’s career took another interesting turn, and she became a true ‘hyphenate.’ "I had always wanted to write. That’s what I had gone to school for, so I began working on screenplays," Meyer relates. She sold her first script, titled "Hitting Home," in 1994 to Jerry Weintraub Productions and Warner Brothers. A string of other sales and assignments helped her writing career to take off. In the past decade, Meyer has written two scripts for Martin Scorsese and power producing team Harry and Mary Jane Ufland. In 1998, she inked a deal with Scorsese, the Uflands, and Touchstone Pictures to tell the story of Newton, Massachusetts bookmaker Burton ‘Chico’ Krantz. Krantz was one of Whitey Bulger’s top bookies. Krantz died in witness protection waiting to testify against the fugitive Bulger. Meyer has also written scripts for Robert DeNiro, CBS, and Fox Family Films.

In 2000, Meyer took a tenure track position at the Chapman School of Film and Television (Chapman University). "As a teacher," Meyer explains, "I was helping to guide hundreds of students as they made and marketed their own films. Suddenly I realized I could be doing this as well." She decided to add ‘director’ to her already lengthy moniker. She poured over material, looking for an idea for a short film. Again, she found what would help her to succeed right under her nose: there was a sequence of scenes in the first script she sold ("Hitting Home") that seemed perfect for a short film. "The List" was born.

"The List" is a tragi-comedy about a remorseful former Yankees baseball star who reappears in his estranged daughter’s life when she gets hit by a diaper truck and is temporarily confined to a wheelchair. In a desperate attempt to make amends for his past failings, he wheels her into a welcome home party comprised of every man on her list — the list of ex-boyfriends she hoped never to see again." To make the film, Meyer called in a few favors from friends and family and raised the $48,000 she needed to make the film. The short stars Corbin Bernsen (with whom Meyer worked 10 years prior on a TV movie) and Ashley Williams. Williams also attended Boston University (School of Fine Arts), and after working on the situation comedy "Good Morning Miami," leapt at the chance to work on a movie.

To make "The List," Meyer brought aboard a mix of volunteer students and paid professionals. "I’d been in the business for many years," Meyer says, "But not any of my work on sets as a producer could prepare me for the role of director. I could hardly believe I was the one calling ‘Action!’" Shooting took place over five days in June of 2003 and by September it was in the can, ready for the film festival circuit.

The film has already shown this year at the Palm Beach International Film Festival and the Beverly Hills Film Festival. Meyer was especially excited to return to Boston to screen this film; in a sense, it’s where it all started for her.

Meyer hopes to continue in the role of writer-director, and "The List" could be a springboard to more projects in that capacity. She notes, "At Cannes this year, it was the first time they had a short film market, and ‘The List’ made the rounds." There’s also some interest in a television series or a feature film based on the film. "My goal is to direct what I write," Meyer states. As Meyer’s career demonstrate, nothing (and no part of the country) seems out of reach.

This was the Boston International Film Festival’s (June 24-27) second year. The BIFF was founded by Patrick Jerome, a local filmmaker who runs BWAY 7 Productions. "As a filmmaker myself," Jerome explains, "I’ve been to festivals all across the country and the world. I wanted to do for Boston what these film festivals did for other cities, and even more importantly, I wanted to give independent filmmakers exposure. It’s also a great chance to network with hundreds of filmmakers, a wonderful opportunity to bring people together to discuss current and future projects."

The first BIFF, in 2003, was a remarkable success. Supported strongly by Mayor Menino, Jerome and the festival anticipated about 200 submissions. Much to their surprise, they received over 1,000 entries. "We received entries from amateur filmmakers all the way up to major production companies," Jerome states. Comedy star Jack Black was even producer on one submission and turned up quite unexpectedly last year for its screening.

The second BIFF was even more successful: the festival gained a bevy of high-profile sponsors, which included BET, Bravo, A & E, AMC, The Boston Phoenix, Stuff @ Night, and WFNX. Over 2,000 submissions were received and 112 selected for screening. Films range from shorts (such as "The List") to feature-lengths to documentaries and screened at a number of sights throughout the city of Boston.

Opening night ceremonies were held in the John Hancock Hotel’s Hancock Room. Directors, actors, screenwriters, producers, and many more mingled and did just what Jerome hoped the festival would do: it provided a forum for independent-minded filmmakers to make connections and discuss their art.