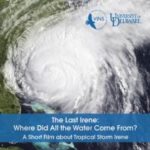 A collaborative effort between Vermont Institute of Science and Professor Cathleen Geiger, a geoscientist at the University of Delaware, who resides in West Hartford, VT, this film profiles Tropical Storm Irene and its impact on Vermont. The film demonstrates how Irene was both major environmental event and a major life event for Vermonters, and in doing so, offers a “teachable moment” for explaining the science of extreme weather events.

Director(s) Bio:: University of Delaware Professor Cathleen Geiger is a sea ice geophysicist and resident of Vermont who works on mathematical relationships which explain polar sea ice processes. Her long term program focuses on innovative ways to engage in active learning for research and education so that she can improve communication about the processes of climate transition from a local perspective.
John V. Dolan served as President of the Vermont Institute of Natural Science (VINS) since 2007 to 2013 when he retired. He is a Dartmouth College graduate and has a Masters of Science degree from the London School of Economics and M.B.A. and M.A. degrees from the Wharton School of Business at the University of Pennsylvania. He resides in Hanover, NH.
VINS's mission is motivating individuals and communities to care for the environment through education, research, and avian wildlife rehabilitation.
Longshot Productions served as Director of Photography and Editor.