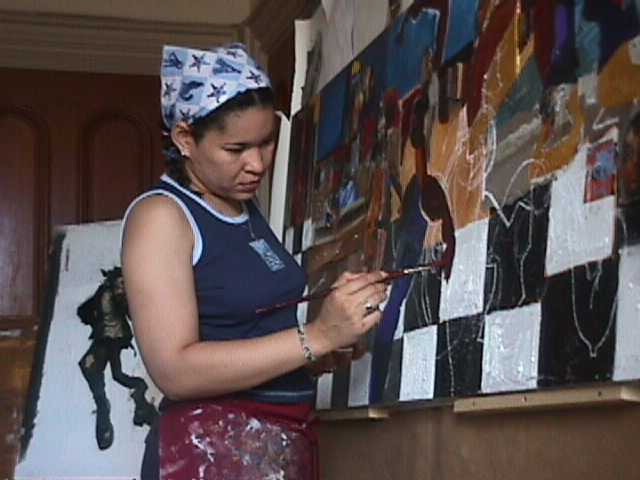 Share
Rachel Clift follows her vision and inspires young female artists to do the same in her documentary 'Take It From Me,' screening at the Coolidge Corner Theater this month.

Her professors told her to keep it simple, but Rachel Clift knew from her own experience that her subject was anything but. Clift’s half-hour documentary "Take It From Me" draws a portrait of three Boston-based artists: singer/songwriter Jess Klein, dancer/choreographer Aparna Sindhoor, and painter Chandra Dieppa Ortiz. The film takes the audience through a day in the life of their creative processes as they turn their ideas into an art form.

Clift began the project as her graduate thesis at Boston University in 1999. She chose her subject because she was "curious about the creative process for an artist my age." She also wanted to explore the role of the female artist. In school she "learned predominantly about male filmmakers. They were fascinating but I needed role models" to whom she could compare her methods. She found three unique performers, all women in their late 20’s or early 30’s, whose creativity and originality is reshaping their medium.

"Music is very much a part of film," notes Clift, "and painting is a visual form. Dance is also visual and reminds me of the rhythm of film and… the movement of the camera." With this in mind the young filmmaker sought out a musician, a painter, and a dancer whose art she felt contained elements connected to her own work. Clift had been friends with Klein in college, and the folk singer signed on early in the project. The director first saw Dieppa Oritz’s work at the Jamaica Plain open studios and her visual style "totally clicked" with Clift’s. When she met the painter she knew she wanted to work with her. After some research she contacted Sindhoor; they met for lunch and Clift felt an immediate connection. "It was amazing to find women who were dealing with the same issues I was artistically," she says.

This close relationship between the filmmaker and her subjects resulted in a deep and intricate portrait of their creative lives. Clift lets the artists speak for themselves to offer insight into the artistic effort that an audience does not see in a finished product. The title, taken from Klein’s song "Little White Dove," evokes the film’s spirit of intimacy and passion. For Clift and the artists she profiles, art is a means for their audience to walk away with a part of their love and enthusiasm for their work. They also want to let the audience know that while their art is a labor of love, it is still labor: "like saying, ‘take it from me, being an artist isn’t easy,’" Clift says.  She found out just how true that statement is when she began the post-production process. "I thought I had it all planned out," she says, "but when I got into the editing room I had a panic attack. I had to make these three very different women exist in the same world for a half hour." Her professors suggested that her idea might be too ambitious. They told her that she should keep the film under fifteen minutes and perhaps provide only a brief introduction to each artist. "Their mantra for a thesis film was ‘keep it simple, make it a calling card,’" she recalls.

In spite of her teachers’ advice and the difficulty she faced in putting the material together, Clift remained true to her vision for the project. She wanted to do more than just let viewers know that these artists existed; she wanted to show how their efforts could be both a form of personal expression and a force for social change. The complexity of her idea did not allow her to finish the film in the time allotted to her in the university’s editing room, so she had to seek out other venues to complete the work. Still, she knew that she had made the right decision about the focus and style of her film. "I listened to my own heart and passion… and followed my intuition," she says. The film community has recognized her honesty and unwillingness to compromise. "Take It From Me" won best short documentary at the Woods Hole Film Festival, Best Documentary at the New Bedford Film Festival, and was an official selection at the Vermont Women’s Film Festival, the Rochester International Film Festival, the Lake Placid Film Forum, and the Newport International Film Festival.

More important to Clift than these awards, however, is the enthusiastic reception the film has received from viewers. "Audiences have been very positive and supportive, especially the women," she says. "They have been inspired by the film, and if I can help people pursue their artistic passion, I have reached one of my goals."