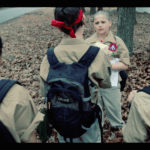 A recluse, trapped in his own world, learns how to live again when an energetic Owl Scout shows up on his doorstep.

Director(s) Bio:: Lucien Flores is a freelance filmmaker who directs, writes, and edits short films, music videos, sketches, commercials, and more.
He's a graduate of Boston University's film school where he was the Production Director of Boston University’s AdLab and a writer of a New England College Emmy-winning episode of BUtv's "Welcome Back."
His most recent project took him to Beijing where he directed a documentary about ice hockey. Before that, he won Best Director at the 2014 48 Hour Film Festival in New York City for Plutoed.
Outside of film, Lucien writes about arts/entertainment, shoots concerts, and interviews artists. He was Music Editor of Boston University's The Daily Free Press, a DJ on WTBU, and contributor to multiple online journals.
He's a native New Yorker and has worked for Red Hour Films, Groundswell Productions, Olympus Pictures, Viacom, Angel TV, Nick Davis Productions, Post Hoc Management, and Vector Management.