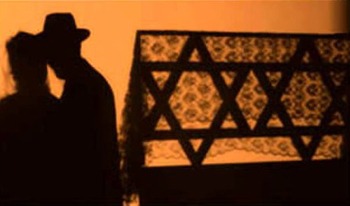 Share
Religion and movies merge in this year's Boston Faith and Film Festival.

"When God created the world, I believe this is what He imagined," the post-it note read. It arrived in the mail, a harbinger of hope, stuck to a stack of photographs taken in New York City after a showing of Sandi Simcha DuBowski’s movie, "Trembling Before G-d."

The pictures beneath the post-it were more than just memories. What Sandi saw as he looked at the prints were the faces of Hasidic, non-Hasidic, Jewish, non-Jewish, gay, lesbian, straight, Asian and African-American people who had all come together for the same reasons. To see his film, to discuss his work, to revel in the world he created, and to enjoy a moment where people who have everything and nothing in common can understand one another.

"After the screening we stood outside the theater for two hours and took pictures of each other," Sandi remembers. "Everyone shared their lives and talked. It was just an amazing evening of being honest and revealing parts of our lives that people wouldn’t normally reveal. My film is already breaking down barriers."

"Trembling Before G-d" is a feature documentary that spotlights the personal stories and complex struggles of gay and lesbian Hasidic and Orthodox Jews. "The film portrays a group of people who face a profound dilemma — how to reconcile their passionate love of Judaism and the Divine with the drastic Biblical prohibitions that forbid homosexuality."

"I did this film because people were in need," Sandi explains. "It was clear that it could be a catalyst for change and alleviate pain."

What Sandi’s story illuminates is just one of many unprecedented moments engendered by the union of faith and film.

How do you define the role of religion in film? What is film’s place in religion? To pinpoint the relationship is as difficult as looking through water. No matter how wide you open your eyes, you still can’t see clearly. There are murky and infinite interpretations regarding where and how these two forces meet.

But one thing is certain. Religion and film are two of the most powerful influences that shape our behavior and lives. When they are combined, they conquer complex topics and incite exploration. Faith and film breed passion.

Theologians and artists might approach the impact of these two energies from different sides, but their sentiments revolve around similar principles. From a religious perspective, film raises existential questions, forcing people to critique their own faith, and challenge or reaffirm their beliefs. From a cinematic stance, movies are the most persuasive medium for making religious statements, educating and eliciting emotion.

"At its best, film is not didactic," says Sara Rubin, director of the Boston Jewish Film Festival. "As an art form, film brings us out of ourselves and into other countries, other times, and in touch with other people."

A good movie is seductive. It opens our eyes. Themes, characters and dialogue seep into our minds, challenging us, inspiring us, demanding us to question, persuading us to understand, and pushing us to discover. A powerful story lingers like a vivid dream. It sparks communication and change.

"A definition of religion is simply those things that we bind our lives to most closely," says Rev. Dr. Rodney Petersen, executive director of the Boston Theological Institute. "In other words, the very ideas or perceptions that give us the courage to get up in the morning and to go about our daily work can in some sense be very religious. Most films that grab your attention deal with the deep human values that cause you to reflect on the nature of things."

The second annual Boston Faith and Film Festival, themed, "Welcoming the Stranger," will be held at the Brattle Theatre in Cambridge, February 8-9. Bryan Stone, a theology professor at BU, started the event as a way to bring the religious and film communities together.

"I want the festival to be a place where people from all religious faiths can explore film and look at how it serves as a way of shaping our values," he explains. "Film is a way to think about religious issues because it raises them in unique ways, in ways that aren’t necessarily religious. The meaning of life, the meaning of death, the meaning of suffering and the presence of evil all come up so interestingly. Film is a window to a broader world. It challenges some of our customary ways of interpreting things."

"I think sometimes we tend to think that only films that have explicit religious content are about religion," says Dr. Carrie Doehring, a BU theology professor who uses film clips as case studies to teach pastoral care. "I like to think of religion as having fingerprints and that any film about suffering has religious fingerprints all over it.

"I think because films have such power to pull us into someone else’s life experience, they have tremendous ability to engender empathy," says Doehring. Carrie also comments on kinship. When people get together to discuss suffering and life issues, their conversation creates a community that can inspire action.

"Film is a very educational medium," says Laurel Chiten, whose movie, "The Jew in the Lotus," explores Jews who are drawn to Buddhism. "It’s also a very emotional medium. If you want to bring about any kind of change, film is the way to do it. It promotes discussion."

When religion and artistic expression meet, they kindle communication and satiate need. At their core, they share the inherent ability to create opportunity.

"Films like ‘Trembling Before G-d’ bring difficult issues to the fore," says Sara Rubin of the Boston Jewish Film Festival. "We showed it before 600 people, and one of the amazing things is that we had a panel discussion afterward and nobody left. I thought, clearly the film and the topic hit a nerve in people and offered an opportunity.

"Films offer an opportunity for people to think. The theatre becomes a place of community where you can discuss the thoughts that the film provoked in you," says Rubin.