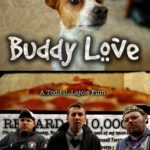 When Walter, animal-enthusiast, comes home to find his dog missing, he and his dim-witted friends take the case into their own irresponsible hands. Armed with unintelligible determination and enthusiasm, these friends steadily ruin every clue they come across on their journey to find Walter’s dog.

New England Connection: Every person in this film was either born or raised in NH. Most of the crew are personal friends of the Director, Todd J. Lajoie.

Director(s) Bio:: Todd J. Lajoie grew up in good ol’ Manchester, New Hampshire. All throughout his childhood he seemed to be that really strange kid that some almost didn’t want to admit being friends with but liked being around him because of his crazy sense of humor and imagination. Once Todd reached high school he collected others with massive creativity and developed a serious interest in film. After graduating, he ventured out and made many short films with those very same friends. He is currently in the works of creating his first feature film.