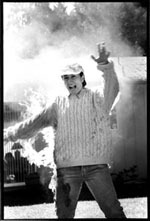 So You Want to be a Stuntwoman?

Share
Once she got past the raised eyebrows and concerned looks, Rhonda Moniz took the leap to be a full-time stuntwoman

This is exactly the response I have gotten from concerned friends and family. Of course, it is always accompanied by a raised eyebrow and a look on their face that says it all: "Are you nuts or something?" Maybe, but I have spent the last year and a half increasing my skills and training to become a full-time stuntwoman. Most people ask me the same question: "What on earth made me choose such a career path?" I must admit it was not initially my idea. I have loved film and special effects since I was about five years old. My first coveted movie magazine was "Monsters," a great behind-the-scenes look at the horror genre. As I got older, I reluctantly had to put away "those childish things" and move on. I never really lost the fascination with film and all that behind-the-scenes chaos that goes into making one.

I started getting involved in theater in my early 20s, and over the years became involved in local plays, mostly small-town productions with an audience that consisted of the janitor and a cast member’s mother. So much for my thespian roots. I continued to study acting and film off and on over the next several years, taking classes in Boston and Rhode Island as well as becoming involved in video production. One day while looking through the "Boston Phoenix," I spotted a small ad for an acting coach and decided to call. This call proved to be the catalyst.

I worked with Dossy Peabody over the course of several months, when our busy schedules would permit. This time with Dossy was the most valuable to me and far exceeded any class I had taken thus far. Dossy has the uncanny ability to zero in on your strengths and help you to capitalize on them. One day while we were working together, Dossy looked at me and said, "Have you ever considered stunt work?" Eureka! Of course. Why hadn’t I thought of that? I have always been athletic and an adrenaline junkie, a combination that usually finds me in some interesting places. I’ve hung by my toes off the side of a mountain while ice climbing in New Hampshire (never mention this to my mother), and out of a shark cage 18 miles into the Atlantic Ocean off of Point Judith, RI (my mother knows about this one). Why not get paid to do this stuff?

So the rest is history? Well, not quite. Being a stuntperson takes a lot more than nerves of steel and a willingness to leap tall buildings in a single bound. Stuntpeople are a highly trained specialized group of elite athletes who engage in film-specific situations that can be life threatening without strict adherence to every detail and an emphasis on the crew’s safety. Stuntpeople are trained in areas such as precision driving, high falls, weaponry, unarmed combat, fire work, special effects, climbing, and rappelling, as well as martial arts, horse work, and stair falls. There are several associations that conduct intensive training in these areas, and it is wise to do some research. Most associations are listed on the web and can be found if you type in "Stunts" at your search engine.

Stuntpeople tend to specialize in one or two areas, becoming experts in fire and precision driving, for example, but may do a number of required technical stunts in addition. As for my stunt resume, I have been building on a repertoire that includes scuba diving, ice climbing, rock climbing, and rappelling, as well as hand-to-hand combat, tumbling, firearms, rollerblading, sailing, and motorcycles, to name a few. At the end of this month, I am attending the Stunt Training Seminar, hosted by the United Stuntmen’s Association, for fire work, high falls, precision driving, special effects, and a slew of other requirements in the stunt industry. So if you are interested in entering the world of stunt work, be prepared to do your homework and train hard.

And a shark dive or two wouldn’t hurt…