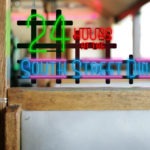 In Boston, the city that brought us Cheers, there really is a place where the staff know all the regulars by name. But it’s not a bar, it’s a downtown diner that’s been there since the 1940s and has become a historical and cultural icon. 24 Hours At The South Street Diner introduces a diverse group of waiters, regulars, late-night revelers and local celebrities who call Boston’s only 24/7 restaurant home. They share stories of why this tiny diner means so much to the neighborhood and the city of Boston and how it’s survived fires, bankruptcies and even an attempt to revoke its late night license.

New England Connection: Filmmakers Melissa and Tom Dowler work and live in downtown Boston, steps away from the iconic South Street Diner. Melissa, a Boston native, lived in London for 8 years, where she met and married Brit Tom. They moved back to Massachusetts in 2008, settling in Boston's Leather District in 2010.

Director(s) Bio:: Husband and wife filmmakers Tom and Melissa Dowler live and work in downtown Boston. Melissa, a Boston native, lived in London for 8 years before returning to Massachusetts in 2008. Having spent most of her career in advertising and marketing, 24 Hours At The South Street Diner is her first film. Tom, originally from the UK, studied film at the prestigious Goldsmiths College, London, before moving the US in 2008.
Together, Melissa & Tom run Long Haul Films, a multifaceted production company based in downtown Boston.