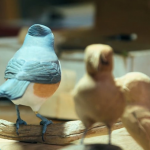 Steven Valleau has been a professional bird carver for thirty years, most of them spent at the Wendell Gilley Museum in Southwest Harbor, Maine. In this understated film, Valleau shows us that even the quiet and passionate pursuit of a solitary art such as his can take a surprising toll on the lives of those around him. Providing poignant glimpses into an artists’ life, as well as the nature of obsession, BIRD CARVER shows us how time can be purposefully, beautifully, and sometimes dangerously spent.

New England Connection: BIRD CARVER has a Maine-based subject and was shot on location in Southwest Harbor, Maine.

Director(s) Bio:: Madeleine is an emerging filmmaker based in Toronto. She Co-Produced the award-winning documentary THE SECRET TRIAL 5, which premiered at Hot Docs Canadian International Documentary Film Festival, and went on to play at festivals internationally. She has worked in many other capacities for a variety of documentary and narrative projects and is currently directing and producing her first feature documentary, CONJECTURE. Prior to her production work, Madeleine worked at Blue Ice Pictures, a leading Canadian production and film financing company and at the not-for-profit Women in Film and Television - Toronto. She is currently the VP, Operations for Kew Media Group Inc., a large, independent content company where she oversees a portfolio of 11 production and distribution companies. She holds an Honours BA from the University of King’s College in Halifax and a MA in History from the University of Toronto.