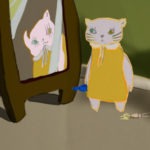 This PSA (public service announcement) film was made as a school project to address how objection of the female figure leads women into plastic surgery. In this film, a little kitten girl receives a barbie doll that she admires and wants to look like her, so she childishly tapes herself up to look like her doll.

New England Connection: Golden Sweet attends Massachusetts College of Art and Design as a full-time student, double-major in painting and animation. Her birth name is Melike Kocak but her artist birth name is Golden Sweet.

Director(s) Bio:: Born in Istanbul, Turkey in 1991, she was born to idealistic artists in love. Her dad as a photo-journalist and her mother as a painter always encouraged her vandalizing drawings on the wall of their apartment. She had a pencil and a paper since she can remember so she could share the world as a discoverer, as an adventurer, as an artist. In high school, she went to the studio of Mahir Guven (one of the most known and the best artists in Turkey) to study which helped her to begin her career as a professional artist. She will be graduating from MassArt in May 2014. 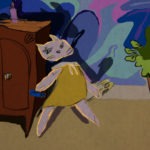