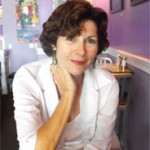 Marian Gagnon has been making documentaries since 2004 and founded Goodnight Irene Productions: An Indie-Documentary Film Company in honor of her mother, Irene. While she is passionate about the documentary genre, Marian’s true love is producing documentary films about lost, forgotten, or untold women's stories. Her background and 15 years experience as an award-winning journalist have paved the way for her avocation as writer, director and producer of documentaries. Marian also is a full-time Professor in the College of Arts & Sciences at Johnson & Wales University in Providence, R.I., teaching journalism, film studies, visual literacy, speech communications and literature. All four of her films consistently air on R.I. PBS and two of them, including her most recent documentary, America’s Forgotten Heroine: Ida Lewis, Keeper of the Light have earned New England Emmy nominations. Marian was born and raised in Manchester, N.H. but has lived the majority of her adult life in southern Rhode Island. She has a B.A. in Journalism, a M.A. in Teaching, and a Ph.D. in Interdisciplinary Studies with a focus on Media Studies and the Documentary Genre.