An immigrant mother gives up everything and flees America rather than face possible separation and deportation.

New England Connection: Filmed in NY, CT and VT with actors and crew from around New England.

Director(s) Bio:: Raised in Vermont and South America, Israel is a self taught film maker who is passionate about creating stories that are relatable and authentic while being entertaining and informative. Israel lives with his wife and three children in Stowe Vermont 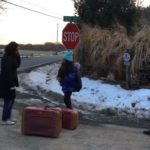