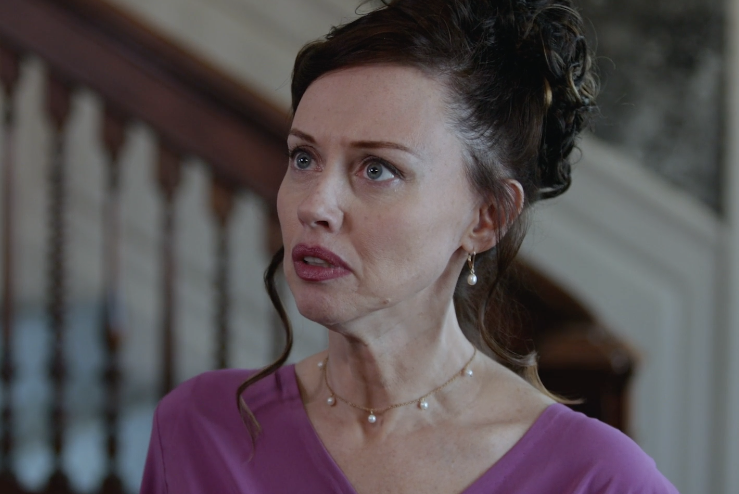 NewEnglandFilm.com talks with René Zara about her film Mrs. Osbourne, which screens in the 2020 Online New England Film Festival.

René Zara: I became a filmmaker by accident. I am an actor first and foremost. And coming to the unfortunate conclusion that no one was going to cast a vulgar American in a Jane Austen film, I decided to create one for myself. I learned the process simply by meticulously studying those around me on the projects I was fortunate enough to be cast in. And having never produced a film before, I enlisted the help of my dear friend, Christine Altan—an award winning writer/producer/director—to guide me along in the journey.

Zara: My niece and I visited the Crane Estate in Ipswich, MA, which provoked us both to think that a Jane Austen-type film should be shot in that stately home. I went back to my office and promptly wrote a feature script. Knowing full well that I didn’t have the budget to shoot the entire feature, I decided to select an excerpt from the script and turn it into a short.

Zara: This film has been selected for the Boston International Film Festival but has yet to be screened due to COVID-19. Can’t wait for the world to see it!

Zara: The crew was easy. I knew I’ve always wanted to create a project with my brother (Director Gregory Bergeron), who was already an accomplished filmmaker and video producer. And he came with his own extremely talented team, including illustrious filmmakers Sid Levin and Bruce Lundeen.

The casting process was equally simple. I wrote this piece for myself, so there was one less person I had to find. Killarney Traynor shares an equal passion for Jane Austen and period films in general. Having worked with her on her own Edwardian period piece, The Dinner Party (Narrow Street Films), I knew she was the perfect person to play Fannie. Casting Mr. Blakeney was probably the most involved. I sent out a call for headshots and reels and narrowed it down to about five, whom Christine and I invited to submit self-tapes. After two in-person callbacks, we knew that stage and screen actor John Joseph Marshall perfectly possessed the calculated and complex nature of Mr. Blakeney.

NewEnglandFilm.com: Anything else you want to share that might be of interest to our readers—about you, your work, your process etc.

Zara: Thank you so much for watching and your support! I hope to meet all of you in person one day! Xx

Zara: “What happens next?”

Zara: I’m in the process of furthering my acting career. But since we are still in the middle of a pandemic, I’ve been writing like crazy—including a feature taking place in Occupied France during the Second World War.

Zara: Just get out there and do it. It’s your idea, it’s your child. Do whatever you need to nurture that idea. Pay no attention to whether or not you will acquire distribution or if it will/won’t be liked. It’s a story you want told. It deserves to be told.