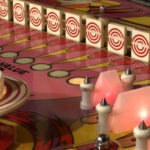 Director(s) Bio:: Shawn Harmon is a Media Studies major at the University of Southern Maine. He lives in Portland with his wife and daughter. This is his first effort in directing.