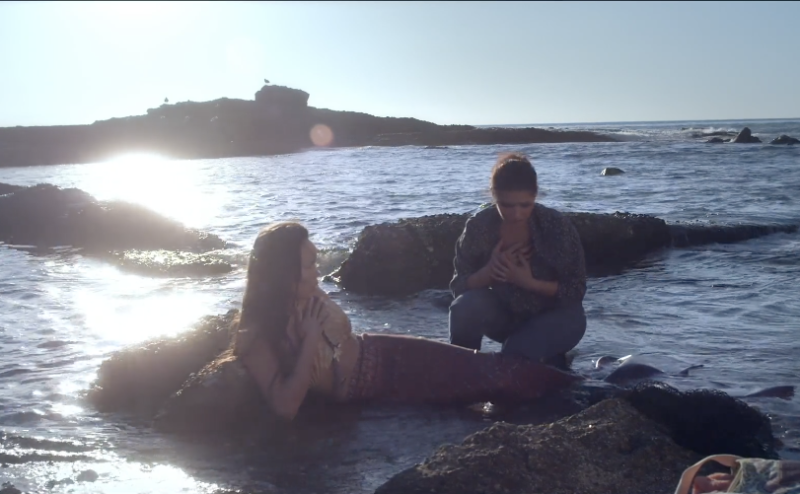 NewEnglandFilm.com talks with Chloe Gardiner about her film A Siren’s Sorrow which screens in the 2020 Online New England Film Festival.

Chloe Gardiner: From a child, I always loved movies and originally wanted to be an actress. Watching programs like the Actors Studio caused me to become more interested in what occurred behind the camera instead of in front of it. I still wanted to pursue a career in film, so I applied to several film schools and was accepted into Loyola Marymount University in their film and television production graduate program.

Prior to starting film school, my only experience creating films was with making music videos and short film parodies with my cousins. In my first semester, I wrote and directed my first three films, and through that experience I grew to love writing and directing. While studying at LMU, I learned all about filmmaking, and more importantly I learned how much I love writing stories and making them come to life!

As a child, I loved the fantasy genre. I loved fairy tales and I loved the stories behind mythical creatures such as fairies, unicorns, dragons, and, especially mermaids. I still do. I was always interested in the mythology behind them. When I started creating my own stories, I thought it would be interesting to create a film showcasing the dark side of mermaids. Mermaids in film are often portrayed as beautiful, docile, innocent, and naive creatures. But in reading about the mythologies of mermaids from other cultures and folklore, mermaids were seen as harbingers of bad luck. They were associated with danger such as drownings, floods, hurricanes, sea storms, shipwrecks, and tsunamis.

Another vision I had with this film was to have diverse representation in leading roles. I find the representation of diverse talent in my favorite genres, which are science fiction, horror, and fantasy, especially black actors and characters, to be rare and my goal is to create more stories where their roles as leading characters are expanded.

There are many films that gave me the inspiration to create A Siren’s Sorrow and all for different reasons. These films include Disney’s The Little Mermaid, Pan’s Labyrinth, Mulholland Drive, The Ring, Peter Pan, The Witch and The Shape of Water. I was also inspired by the painting called Ophelia by Sir John Everett Millais as it is how I picture Gaia’s body floating in the water after Lorelai has taken her soul. Lana Del Rey, a musical artist, is also my inspiration. Her music is very ethereal, but her songs have a haunting sad melody to them. Her music captures the sadness and the loneliness I want to explore with the characters. Her music also inspired the music I wanted to add to my film. Mermaids were known to lure soldier to their death with their singing.

In summary, I was very excited to create A Siren’s Sorrow as I have always loved mermaids and stories with fantastical elements. It is exciting to bring all of my childhood fantasies and imagination to the big screen. I hope people enjoy my film as much as I loved creating it.

Gardiner: All of my crew consisted of my classmates from my school, Loyola Marymount University. I was able to find my cast from the casting website Backstage.

Gardiner: One aspect of today’s social and political moment that my film addresses indirectly is giving under-represented people an opportunity to pursue their dream of acting and directing. Although my stories can be cast as racially neutral roles, I think my film reflects my push for diversity. I have three female leads in the film, all of whom are people of color. People of color aren’t often cast for lead roles in fantasy, horror or science fiction films, nor are directors of color given the opportunity to direct these films.

My hope with A Siren’s Sorrow is that my film can show that people of color can make films outside of their race and within any genre with women, especially women of color, in lead roles .

Gardiner: When audiences see my film, I want them to have an emotional experience. I hope they feel the grief of and sympathy for Gaia as she has just lost her child. I want them to feel hopeful when Gaia believes that Lorelai will bring her daughter back. At the end of the film, when Lorelai tricks Gaia and steals her soul, I want the audience to be shocked and on the edge of their seat. I want the audience to be entertained by the fantasy elements, but feel the realism of Gaia’s emotional journey.

Gardiner: I just completed my thesis film, Pumps. Currently, I am now in pre-production for a short animated film called, Sisters of the Nile. I am writing and producing the film with my former classmates from Loyola Marymount University.

Gardiner: Don’t be afraid to pursue your dreams and take risks.

A Siren’s Sorrow screens at the 2020 Online New England Film Festival at NewEnglandFilm.com.